Piers Morgan: The squabble over replacing RBG on the Supreme Court has exposed BOTH sides as a bunch of shabby, insincere, hypocritical charlatans and even the great lady herself isn’t exactly blameless 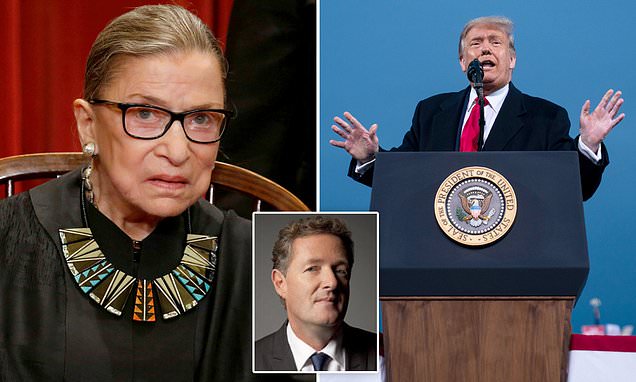 ‘Fight for the things that you care about,’ said the late, great Supreme Court Justice Ruth Bader Ginsburg, ‘but do it in a way that will lead others to join you.’

I thought of this quote as I observed the shockingly unedifying reaction to her death, which has swiftly become the most outrageously hypocritical hyper-partisan unprincipled sh*tshow in modern US political history – and the bar for that accolade was exceptionally high.

The stakes are incredibly high.

If President Trump can force through Ginsburg’s replacement before the November election, it will be the third Supreme Court appointee he’ll have successfully got approved in his first term – an unprecedented triple whammy for the Republicans in such a short space of time.

That would skew the Supreme Court heavily 6-3 conservative majority, which is why Democrats are so determined not to let it happen.

Of course, we’ve been on this exact same rodeo before, just four years ago in fact.

He was seen by impartial observers as a very sound choice; a brilliantly clever man noted for his moderate and neutral judgement and someone who avoided unnecessary, sweeping pronouncements. His opinions rarely drew dissent.

But the Republican-majority Senate refused to hold a hearing or vote on the nomination because it was election year and Republicans insisted whoever won the election should get to choose the nominee.

It was an unprecedented refusal and Democrats were understandably enraged, stating correctly that it was the constitutional duty of any President to nominate a Supreme Court Justice regardless of when a vacancy occurred.

The Republicans held firm amid hugely rancorous debate, and they won.

After 293 days, Merrick Garland’s nomination expired on January 3, 2017, and new President Trump’s nominee Neil Gorsuch was appointed to the Supreme Court instead.

Now, the situation is reversed.

Conversely, the Democrats are demanding whoever wins the 2020 election should have the right to nominate the replacement – so, they are demanding the very right they argued Republicans should not have in 2016.

The brazen hypocrisy on both sides is almost beyond parody.

And frankly, it makes me vomit.

Chief Hypocrite is Senate Majority Leader Mitch McConnell who led the block on Merrick Garland in 2016 by saying: ‘The American people should have a voice in the selection of their next Supreme Court Justice. Therefore, this vacancy should not be filled until we have a new president.’

On Friday, McConnell announced: ‘Once again, we will keep our promise. President Trump’s nominee will receive a vote on the floor of the United States Senate.’

He was only rivaled in shamelessness by Senator Lindsey Graham, one of the GOP’s grandees.

In March 2016, Graham was absolutely emphatic that Scalia’s replacement should be decided by whoever won that year’s election.

‘I want you to use my words against me,’ he said. ‘If there’s a Republican president in 2016 and a vacancy occurs in the last year of the first term, you can say Lindsey Graham said, “Let’s let the next president, whoever it might be, make that nomination”.’

He couldn’t have been clearer, right?

Yet on Saturday, before even 24 hours had elapsed since Justice Ginsburg died, the same Lindsey Graham tweeted: ‘I will support President @realDonaldTrump in any effort to move forward regarding the recent vacancy created by the passing of Justice Ginsburg.’

Other Republicans have been just as two-faced.

Senator Tom Cotton, opposing the nomination of Merrick Garland, said on the Senate floor in 2016: ‘Why would we squelch the voice of the people? Why would we deny the voters a chance to weigh in on the makeup of the Supreme Court?’