Who will Trump pick to replace RBG? The frontrunner devout Catholic Judge Amy Coney Barrett will battle it out with 20 others on the President’s Supreme Court shortlist including senators Ted Cruz and Tom Cotton 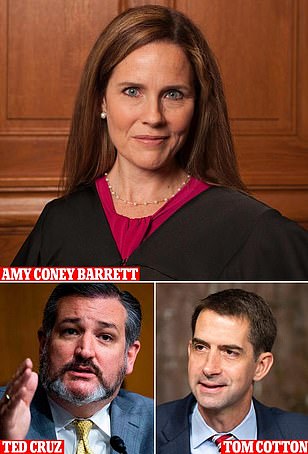 The death of Supreme Court Justice Ruth Bader Ginsburg aged 87 on Friday has presented President Donald Trump with the opportunity to appoint a further conservative judge to the court, pushing it further to the right.

Earlier in September, after it was revealed that Bader Ginsburg was undergoing treatment for cancer, Trump added 20 names to a shortlist of candidates he pledged to choose from if he had future vacancies to fill.

The list includes a variety of conservative judges who have ruled in Trump’s favor, as well as three sitting GOP senators who have backed Trump’s agenda while defending him during impeachment.

According to ABC, the current frontrunner is U.S. Circuit Judge Amy Coney Barrett, 48, a devout Catholic and pro-lifer.

She was already a finalist for the nomination in 2018 which eventually went to Brett Kavanaugh.

Barrett has previously written that Supreme Court precedents are not sacrosanct.

Liberals have taken these comments as a threat to the 1973 Roe v. Wade decision legalizing abortion nationwide.

Barrett wrote that she agrees ‘with those who say that a justice’s duty is to the Constitution, and that it is thus more legitimate for her to enforce her best understanding of the Constitution rather than a precedent she thinks clearly in conflict with it’.

She is a former member of the Notre Dame’s ‘Faculty for Life’ and in 2015 signed a letter to the Catholic Church affirming the ‘teachings of the Church as truth.’

Among those teachings were the ‘value of human life from conception to natural death’ and marriage-family values ‘founded on the indissoluble commitment of a man and a woman’.

Her deep Catholic faith was cited by Democrats as a large disadvantage, however, during her 2017 confirmation hearing for a seat on the U.S. Court of Appeals for the 7th Circuit.

‘If you’re asking whether I take my faith seriously and I’m a faithful Catholic, I am,’ Barrett responded during that hearing, ‘although I would stress that my personal church affiliation or my religious belief would not bear in the discharge of my duties as a judge.’

Among the others on Trump’s list are Senator Ted Cruz, Trump’s closest competition for the Republican nomination in 2016; Senator Tom Cotton of Arkansas, who immediately tweeted he would get rid of Roe v Wade if confirmed; and Department of Justice official Stephen Engel, who drafted a memo justifying denying cooperation with House investigations.

And also in the running are Christopher Landau, the current ambassador to Mexico; Republican Senator and Trump loyalist Josh Hawley; and Kentucky Attorney General Daniel Cameron, among others.

During a campaign speech in Bemidji, Minnesota on Friday night, delivered while unaware of Bader Ginsburg’s death, Trump declared that Senator Cruz would be the appointment he would make if given the opportunity.

He stated that ‘one of the things we have done that is so good with the Supreme Court, we have two Supreme Court justices. We will have at the end of my term approximately 300 federal judges’.

He later called Bader Ginsburg an ‘amazing woman’ having learned of her death.

Despite Cruz being named by Trump on Friday, the senator has said he does not want to sit on the court.

During an interview with Fox News on Sunday he was asked whether he wanted the job, to which he replied: ‘I don’t. It is deeply honoring, it’s humbling to be included in the list … but it’s not the desire of my heart. I want to be in the political fight.’

He was repeating a statement from 2016 in which he also said that the high court is ‘not the desire of my heart’, despite him writing a book about it that is set to be published on October 6.

James Ho is another Texas choice on the list, currently a judge on the 5th U.S. Circuit Court of Appeals and former Texas solicitor general.

‘The Supreme Court could use some more justices who understand the difference between applying the law and making the law, which the Court does when it invents a right to an abortion, infringes on religious freedom, and erodes the Second Amendment,’ he wrote.

He added in another tweet: ‘It’s time for Roe v. Wade to go,’ in reference to the landmark abortion rights ruling.’

On Friday night, however, he tweeted his condolences over Bader Ginsburg’s death.

‘I extend my condolences to the family of Justice Ruth Bader Ginsburg for their loss. She dedicated her life to public service, and now she is at peace,’ he wrote.

Engel drafted memo justifying the White House posture of stonewalling House committee requests for administration documents before there was a formal impeachment inquiry.

‘We conclude that the House must expressly authorize a committee to conduct an impeachment investigation and to use compulsory process in that investigation before the committee may compel the production of documents or testimony in support of the House’s sole power of impeachment,’ Engel wrote.