There’s a devil loose: Two are killed and 14 wounded in mass shooting described as an ‘all-out warzone’ at backyard party in Rochester 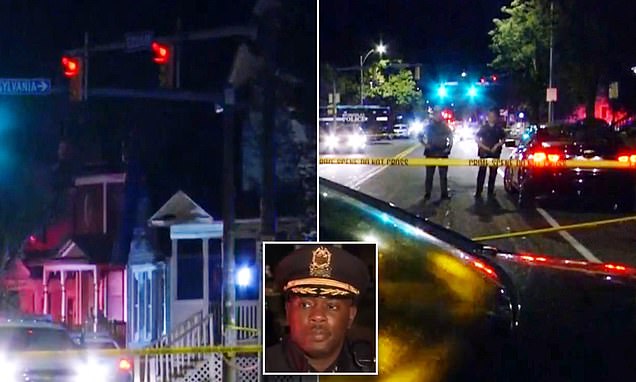 A mass shooting at a backyard party has claimed two lives and left 14 people hospitalized in Rochester, New York.

Police responded to the shooting on the 200 block of Pennsylvania Avenue at around 12.25am, with about 100 people running wildly around a ‘very chaotic scene,’ said Acting Police Chief Mark Simmons.

Investigators are still trying to piece together who opened fire and why. Simmons said it was too early to say whether more than one person was shooting or who the intended targets may have been.

It comes just five days after Simmons took over as top cop, after his predecessor was ousted following weeks of Black Lives Matter protests and unrest over the death of Daniel Prude, who was fatally injured while being arrested in March.

‘We have 16 confirmed victims of shooting. And I’m sad to announce that two of those 16 received a fatal wound,’ Simmons said at a news conference.

A man and woman, estimated to be in their late teens or early 20s, were killed, Simmons said. None of the wounded people were believed to have life-threatening injuries. They were being treated at two area hospitals.

‘This is truly a tragedy of epic proportions,’ Simmons said in a news conference held near the home. ‘I mean 16 victims is unheard of, and for our community, who´s right now going through so much, to have to be dealt with this tragedy, needlessly, for people who decide to act in a violent manner is unfortunate and shameful, and we’re going to do everything that we can as a department to bring those people involved to justice.’

Simmons said it was unclear if the shooting was a targeted or random act of violence. The wounded were being treated in hospital and their injuries were not thought to be life threatening.

Police said that several dozen shots were fired in the shooting. One witness told WHAM-TV that the gunfire sounded like ‘an all-out warzone.’

‘So many people going in so many directions, so many different ways, driving on the grass, trying to get out of here,’ said Billy, who did not want to give his last name.