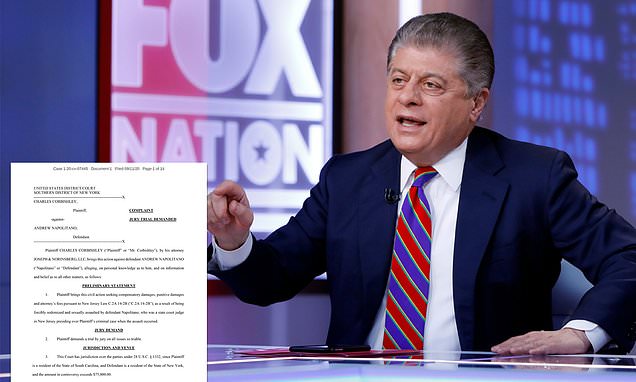 Andrew Napolitano, the Fox News legal analyst and former judge, has been sued by a one-time criminal defendant for $10million who claims that he was forced to perform oral sex on him while he presided over his case in 1988.

A lawsuit filed in Manhattan federal court on Friday alleges that Napolitano sexually assaulted Charles Corbishley after he lured him to his New Jersey home under false pretenses.

Napolitano, who is being accused of sexual assault, battery and intentional infliction of emotional distress, has denied the allegations.

‘These accusations are completely false,’ Napolitano said in a statement given to DailyMail.com by his attorney, Thomas Clare.

‘Full stop. I have never done anything like what the accuser describes, at any time, to anyone, for any reason.

‘I have never had any personal relationship or inappropriate contact or communication of any kind with the man making this accusation.

‘Each and every one of his claims against me are pure fiction. Period.’

Clare said the lawsuit was ‘an outrageous abuse of our court system.’

He also alleged that Corbishley has ‘made threats to harm Judge Napolitano.’

‘Given Corbishley’s violent past and threats to harm Judge Napolitano, law enforcement is monitoring his movements and taking additional steps to ensure Judge Napolitano’s safety,’ Clare said in a statement.

‘We will defeat these false allegations in court and look forward to exposing this brazen attempt to smear a dedicated former public servant with an abusive court proceeding.’

Fox News released a statement to DailyMail.com saying: ‘Judge Napolitano has assured us in the strongest possible terms that these allegations are false and he will fight them aggressively in court.’

According to the court filing, Napolitano was a judge in New Jersey State Superior Court in November 1987, when Corbishley was charged with arson.

Corbishley’s attorney, Robert Hollis, manages to get his client’s case switched so that ‘my friend’ Napolitano would be the presiding judge, the lawsuit alleges.

At the time, Corbishley was not aware that Hollis was ‘running a national prostitution ring’ as well as engaging in other acts that resulted in him being disbarred in New Jersey numerous times, according to the court filing.

With Napolitano as the presiding judge, Hollis is said to have told Corbishley to plead guilty to all three counts in the indictment.

According to the court filing, Hollis instructed Corbishley to meet Napolitano at a residence in a ‘clandestine location’ in Hackensack, New Jersey, in or about December 1988.

Corbishley alleges that Hollis told him to bring a snow shovel and a Christmas card for the judge. Corbishley did as he was told, according to the lawsuit.

When he arrived, Napolitano instructed Corbishley to shovel snow from the driveway and the surrounding area adjacent to the house.

Corbishley ‘found this request to be peculiar, because the driveway already had been shoveled, and there did not appear to be any heavy snow around the house that needed shoveling,’ according to the court filing.

Napolitano then went outside and invited Corbishley to come to the side of the house, the lawsuit alleges.

After the two made ‘small talk,’ Napolitano is alleged to have remarked to Corbishley: ‘You know, you could be going away for a long time.’