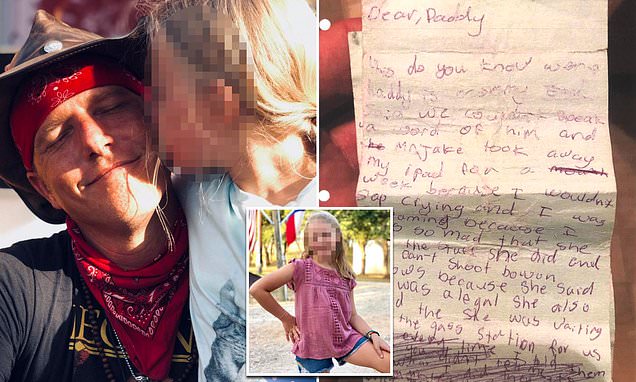 The Texas girl who is seen on a viral video accusing her mother’s fiancé of sexually abusing her wrote a series of heartbreaking notes to her father – including one that contained code words for her to use on the phone when she felt endangered.

Sophie, nine, is at the center of a bitter custody battle between her father Michael, 41, of Seguin, Texas, and her mother Kelly, 34, of Frisco, Texas, that has dragged on for more than five years since their divorce in July 2015.

Although custody was initially evenly split between both parents, their relationship has become increasingly acrimonious and a judge awarded custody to mom Kelly who eventually took the children to live more than 200 miles away from their father.

A video of Sophie screaming and telling her grandmother she had been sexually abused by her mother’s fiancé at a handover on August 14 inspired a social media campaign called Stand With Sophie after it was posted online.  But a judge on Thursday disregarded the increasing social media pressure and has allowed Sophie and her two brothers to return with their mother and have weekend visits with dad.

Now DailyMail.com can exclusively reveal that the little girl sent notes to her father during lockdown in May in which she suggested a series of code words to use on the phone – including ‘daisies’ or ‘dandelions’ for danger.

Another code word was ‘pens’ which was to be used to mean her mother and her fiancé, 39, were fighting.

‘Roses’ meant she planned to send mail to her father, while ‘pens’ meant she had received some from him.

A second letter contained a complaint that ‘Mr. Jake’ – the children’s name for for their mother’s fiancé– had taken away her iPad for a week because ‘I wouldn’t stop crying’.

Another spoke of her mother’s anger over Michael recording a conversation between them and noted that ‘Mr. Jake’ had told the children their father was brainwashing them.

Sophie also wrote of her concern that dad Michael might be arrested if the police discovered he recorded conversations between them.

In others, Sophie spoke of how much she loved and missed her father, and thanked him for sweets he had hidden in her bag that helped her stop crying after she had been returned to her mother’s home.

She also begged him to send her stamps and envelopes so they could continue exchanging letters.

The notes are part of a cache of court documents obtained by DailyMail.com that lay bare the bitter wrangling over custody that has blighted Sophie and her brothers Jack, seven, and Lucas, six, lives.