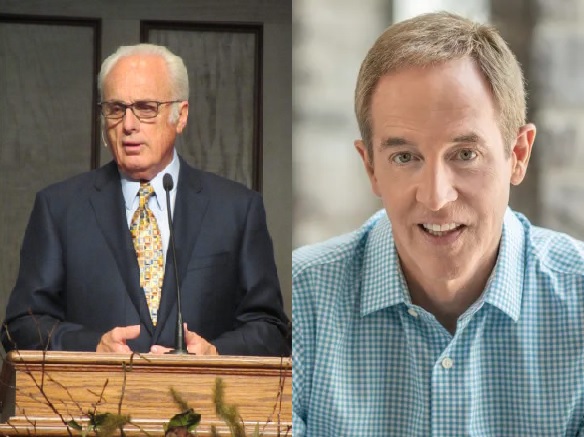 Andy Stanley’s name really should not be mentioned in the same breath as John MacArthur’s. This is Not a Battle. Over 200,000 People Have Died From the Coronavirus Plague and Many of Them Caught the Plague in the church and were church members. Churches Should Not Be Reopening the Building When They Can Easily Meet Online. The True Church Has Never Been About a Building, Because We Worship God in Spirit and in Truth. In fact, the early church met in homes and I predicted a few years ago that the church was going to return to the home and that is what is happening. All Christians should go to church every time the church meets but not in a building in the middle of a deadly plague-pandemic. I urge John MacArthur, One of the Greatest Preachers in American History, to Stand Down on This Issue and Not allow his good name to be sullied by Getting Caught Up in the nasty game of Politics. Andy Stanley is wrong on almost everything but he is right on continuing to have church online instead of meeting inside the building in the midst of a plague-pandemic. All Christians should go to church but not at the church building right now.

I believe this plague is primarily chastisement upon the church because of the sins of the church such as pastors having girlfriends and boyfriends, pastor’s wives having boyfriends and girlfriends, pastors and their wives getting on such sites as Ashley Madison, adultery and fornication being tolerated in the church, and how that many churches have sanctioned homosexuality, some openly and some not openly. In fact the United Methodist denomination, a major denomination with millions of members right before the plague started, were getting ready to vote on whether or not to split over the issue of homosexuality and lesbianism. So I believe this plague is against the church because of our sin and foolishness. Now John MacArthur’s church will no doubt represent the remnant or God’s 7000. Andy Stanley’s church no doubt represents the apostate church. So as a local church, Grace Community Church can probably make it and if that is what they want to do then they should do that. However, where John MacArthur is wrong is at encouraging others to do the same when other churches are a part of the problem and not the solution and are probably part of the apostasy and hundreds or thousands will die because of his statements due to the fact that he is so respected. On top of that, as everyone knows, black people and Hispanic people are disproportionately getting infected and dying of this novel coronavirus plague pandemic. So those Christians who are black and Hispanic would not be wise to follow John MacArthur’s advice on this. AIDS was against the abomination of homosexuality and lesbianism. This plague is against the church for sanctioning homosexuality overtly and covertly and for the causing the family and the government to sanction it.

A year ago, here is what Daniel Whyte III said about Andy Stanley: Daniel Whyte III, President of Gospel Light Society, Calls Andy Stanley a ‘False Prophet’ and Calls on Respected Christian Leaders Across the Nation and Around the Globe, Such as Al Mohler, David Jeremiah, John MacArthur, Franklin Graham, Tony Evans, Jack Graham, Greg Laurie, and Harry Jackson, to Stop Giving Him the Benefit of the Doubt and Rebuke Him Harshly and Openly as a False Prophet Who Has Taught Heresy for Years; He Also Calls on Dallas Theological Seminary and Other Seminary Presidents to Condemn This Heresy, for All Christian Bookstores to Cease Carrying His Books and Materials, and for All Young Pastors to Stop Using His Philosophy, Vision, and Materials. And Yes, We Are Calling on Our Beloved Dr. Charles Stanley and Pastor of His Home Church, First Baptist Church Atlanta, to Pull Him and Sit Him Down Until He Recants and Repents and is Willing to Clear Up the Mess He Has Caused.

Pastors John MacArthur and Andy Stanley, who are both influential Christian leaders, presented dueling advice on how churches should respond to government restrictions amid the pandemic this week, with MacArthur urging pastors to open because the supposed need for indefinite lockdowns is a “lie,” while Stanley recommended cooperation.

MacArthur, who’s been locked in an ongoing public dispute with Los Angeles County over his decision to hold indoor Sunday morning worship services for his thousands of members, argued that while it’s “crystal clear that God has ordained government,” he will no longer aid and abet the “lie” of the ongoing lockdowns in response to COVID-19.

“Being a pastor means you’re a truth teller. That means you’re truth teller when it comes to the Bible. That means you protect your people from deception that comes from the world. That’s part of being a shepherd. You don’t want to aid and abet the lie. This is a lie and you can’t necessarily say that everybody that’s involved in it has an ulterior motive but the lie is dominating and you need to be a truth teller and you need to do your homework,” MacArthur told Lyons.

More than 6 million cases of the new coronavirus have been confirmed in the United States along with 187,000 deaths as of Friday evening, according to data compiled by Johns Hopkins University.

Despite the numbers, however, MacArthur argued that he doesn’t believe that COVID-19 is the threat public health officials claimed it would be.

“In the beginning, we heard millions are going to die. Well, anybody with any common sense is going to say, ‘We don’t want to be responsible for millions of people dying.’ So we did livestream and we went on doing that for four weeks until we were trying to figure out the realities,” he said.

“We hear the other day that there is one death per 100,000 people from COVID in California at this present time, so the narrative doesn’t work. They can’t sell us this lie anymore that makes you shut down the church. We’ve had about 7,000 people in church the last couple of weeks. We don’t know of anybody sick. We’ve never had anybody in the hospital with COVID,” he said.

When asked by Lyons why weekly worship services are essential, MacArthur said the gatherings are necessary for Christians to stimulate each other to “love and good works.”

“I think corporate worship is the stimulating of one another, love and good works as we come together. Even the early church came together. They didn’t have their own buildings so they went to the temple collectively. All of them who were there. There were thousands of them there,” he explained.