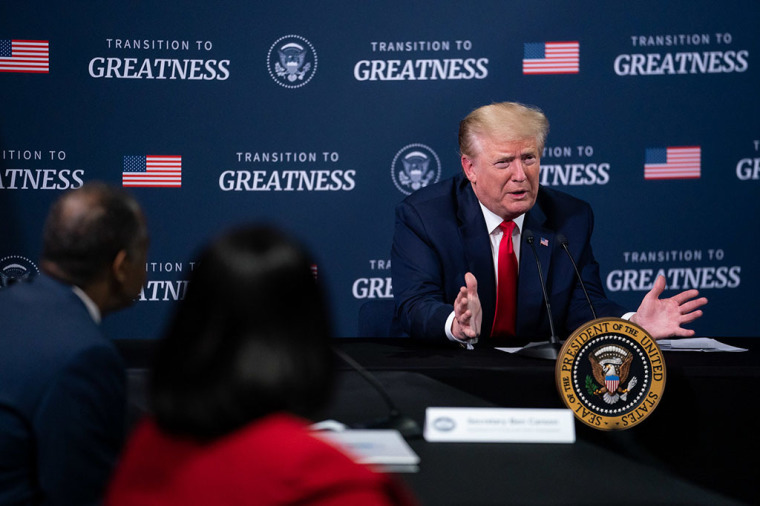 Critical race theory was trending on Twitter after President Donald Trump tweeted his plan to halt funding for federal agencies that promote it.

Trump Orders Purge of ‘Critical Race Theory‘ from Federal Agencies https://t.co/ygXcTXRHsQ via @BreitbartNews This is a sickness that cannot be allowed to continue. Please report any sightings so we can quickly extinguish!

The theory is a controversial ideological framework that some legal scholars argue interrogates the relationship between race, law, and power. Trump directed federal agencies to stop teaching government workers about it and other concepts like “white privilege” because they are “divisive, anti-American propaganda,” as described by a White House memorandum.

Alberta Civil Liberties Research Center defines white privilege, a component of CRT, as “the unquestioned and unearned set of advantages, entitlements, benefits and choices bestowed upon people solely because they are white.”

The memorandum was sent to heads of executive departments and agencies on Friday by Russell Vought, director of the White House Office of Management and Budget. Vought explained that millions of taxpayer dollars have been spent on teaching the controversial theory. Vought further noted that the training teaches employees that “virtually all white people contribute to racism” or are required to say that they “benefit from racism.”

“According to press reports, in some cases these training have further claimed that there is racism embedded in the belief that America is the land of opportunity or the belief that the most qualified person should receive a job,” Vought’s memorandum read.

“We can be proud that as an employer, the Federal government has employees of all races, ethnicities, and religions. We can be proud that Americans from all over the country seek to join our workforce and dedicate themselves to public service. We can be proud of our continued efforts to welcome all individuals who seek to serve their fellow Americans as Federal employees. However, we cannot accept our employees receiving training that seeks to undercut our core values as Americans and drive division within our workforce,” Vought said. “The President has directed me to ensure that Federal agencies cease and desist from using taxpayer dollars to fund these divisive, un-American propaganda training sessions.”

Vought further explained that his office will soon issue more detailed guidance on how to implement the president’s directive.

In the interim, all agencies have been directed to identify spending covering “‘critical race theory,’ ‘white privilege,’ or any other training or propaganda effort that teaches or suggests either (1) that the United States is an inherently racist or evil country or (2) that any race or ethnicity is inherently racist or evil.” All federal agencies have also been directed to “identify all available avenues within the law to cancel any such contracts and/or to divert Federal dollars away from these un-American propaganda training sessions.”

Filmmaker, writer, and policy researcher Christopher F. Rufo noted in a post on his website Saturday that it was his research, conducted over the last several months, that inspired President Trump’s decision to abolish critical race theory training at the federal agencies.

Among the training sessions cited by Rufo is one conducted last year at Sandia National Laboratories where, according to Rufo, whistleblowers reported that a three-day reeducation camp was conducted for white males which taught them “how to deconstruct their ‘white male culture’” and forced them to “write letters of apology to women and people of color.”

Concepts like CRT and white privilege have been points of contention in evangelical circles in recent years. The tension has garnered even more mainstream attention since the deaths of George Floyd and Breonna Taylor.

Last June, Pastor Louie Giglio of Passion City Church in Atlanta was forced to apologize after he was accused of trying to make racism more palatable when he suggested to rapper Lecrae Moore, popularly known as Lecrae, that the term “white privilege” be renamed “white blessing” because it triggers some white people.

“We understand the curse that was slavery, white people do. And we say that was bad but we miss the blessing of slavery that it actually built up the framework for the world that white people live in and so a lot of people call this white privilege and when you say those two words it just is like a fuse goes off for a lot of white people because they don’t want somebody telling them to check their privilege,” Giglio told Lecrae in a discussion with Chick-fil-A CEO Dan Cathy on how Christians should respond to racism.

The incident highlighted some of the challenges that even Christians have in finding the right language to address issues of race and inequality.

Many conservatives such as Ken Ham, president of the Kentucky-based Answers in Genesis, praised Trump’s ban on critical race theory in federal agencies as a “good decision.”

“Good decision. Ultimately, the only way to deal with race issues is to proclaim to the truth of God’s Word & the gospel beginning in Genesis. Until people believe God’s Word revealing the true history of the human race, what our problem is (sin), and what the solution is in Jesus Christ, race issues will never be dealt with as they need to be,” Ham said in a series of tweets Sunday.