WATCH: Joy Anna Duggar Jokes that she is ‘Not Having Another Kid’ while Giving Birth to her Little Girl 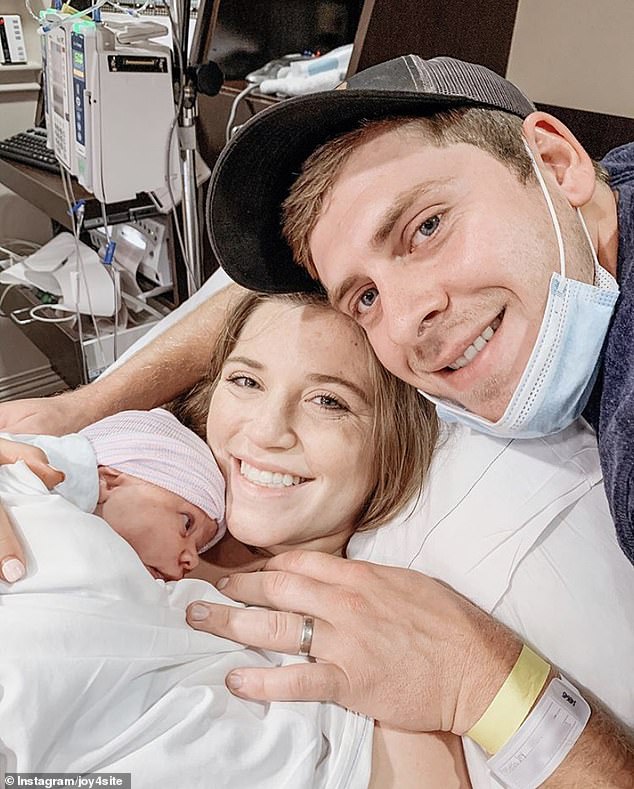 Labor pains with baby number two were tough for Joy Anna Duggar, who joked in a new home video that she’s ‘not having another kid.’

The 22-year-old and her husband Austin Forsyth, 26, welcomed daughter Evelyn May on August 21, and in a new video recorded at the hospital, Joy Anna is seen struggling through labor pain and expressing gratitude for epidurals.

Between painful contractions, the Counting On star expressed disbelief that she didn’t get an epidural while delivering her first child, calling it ‘stupid’ — and went so far as to joke that she was done having children, which seems incredibly unlikely given her family history.

The mother-of-two had gone past her due date, so her doctor ordered her to the hospital to induce.

Once they got there around 8 p.m. the day before the baby was born, Joy changed into her gown and she, Austin, and Rachel all wore masks in the room while they waited for active labor to start.

They also hung twinkle lights for ambience, and plastered ‘birth affirmations’ all around the room — so wherever Joy Anna looked, she could read something ‘encouraging.’

Soon, Joy Anna explained, the doctor came in to help her along.

‘The doctor broke my water, and instantly I started having contractions, two to four minutes apart,’ she told the camera. ‘That’s encouraging. My body’s doing what it needs to do.’

She was then given increasing doses of Pitocin to get labor moving faster.

Joy gave updates via video confessionals on her phone, while Austin’s sister Rachel captured the most intimate moments on camera when Joy took a break from filming.

Images shows her leaning on Austin for support and breathing through ‘intense’ contractions.

Eventually Joy got an epidural, and told her sister-in-law: ‘I’m so happy I got the epidural… I don’t see how people do this without epidurals.’

‘You did it with the last one!’ her sister-in-law told her.

It was bad enough that she joked to Austin, ‘Babe, we’re not having another kid.’

That’s unlikely, given her family history. While her mother Michelle famously gave birth to 19 children, most of Joy Anna’s married siblings have started growing large families of their own.

Despite the agony, when Joy felt like the baby’s entry into the world was imminent — and she was dilated eight centimeters — she stopped to put makeup on. As Austin filmed, Rachel brought over powder foundation and a color palette, which Joy Anna held onto through contractions.

Finally, it was time to start pushing. The camera stayed on Joy’s face as she strained and pushed, with Austin’s hand there to comfort her, caress her hair, and give her a cool cloth.

After over an hour of pushing and with a final moan from Joy, the baby was born.

‘The baby was posterior (sunny side up), so that explains why Joy had such terrible back labor and why she had to push so long!’ reads the video caption. ‘So thankful that Mom and Baby are doing good!!!’

While their ‘birth plan didn’t go as expected,’ Joy said that she ‘loved it.’

‘ I only have one regret… I was so stressed about going into the hospital and how the birth was going to go, that I lost site of the excitement of meeting our baby girl!’ she said.

Nearly a week later, the couple revealed on Instagram that they’d named her Evelyn Mae.

‘I wanted her name to be perfect and elegant!’ Joy Anna wrote on Instagram. ‘We had a hard time deciding but after a few days finally settled on ‘Evy Mae’ and we think it fits her perfectly!’

Last week, Joy had shared video of the first half of her childbirth story, documenting the moments before they headed to the hospital.

The first clip began the day before her due date, when Joy was still pregnant. She admitted she never thought she’d get that far in the pregnancy, and assumed she’d have had the baby a week before.

‘Plans change though, and life happens,’ she said as two-year-old Gideon crawled all over her.

The next day, she, Austin, and Gideon went for lunch and for a 3.6 mile walk in an effort to get the baby ‘on her way out’ — put she didn’t budge.

After visiting the doctor on Thursday, Joy Anna was finally ready to pack for the hospital. She said that the doctor had found that her amniotic fluid levels were low, and was worried that blood wouldn’t be pumping well during labor.

If that was the case, she’d end up needing a C-section — event though she wanted a VBAC (Vaginal Birth After C-section) following her miscarriage and C-section delivery last summer.

So to prevent that, they planned to induce — but had to be careful to do so in a way that didn’t cause her uterus to rupture.

‘So we’re just praying about just what we need to do,’ she said. ‘We’re excited. I’m kind of nervous. I really want to make the right decision for the baby and I don’t wanna do anything to harm her or harm me.’

On their drive to the hospital, the couple picked up Austin’s sister Rachel, who was Joy Anna’s doula for childbirth.

‘I’m kind of nervous about all of this, all the unknowns,’ Joy Anna admitted on the way there.

The couple first shared their baby news on Instagram at the beginning of last week, with Joy writing: ‘To say my heart is full is an understatement..We have been dreaming of this day and are so happy to announce that our baby girl arrived August 21st at 2:12pm weighing 8lbs 5oz and is 19.5′ long!’

She also shared two photos of Evelyn, Austin, and herself in the hospital.

‘She has the best personality, is easy going, and loves to be held!’ Joy Anna wrote. ‘She has her nights and days mixed up, but honestly, I love it! Getting to spend that quiet, quality time with her through the night has been SO special!’

Joy was still bumping along on her due date, August 19, and shared the final photos of her pregnancy on Instagram last week.

‘We are just here impatiently awaiting your arrival,’ she wrote at the time, posing with the couple’s two-year-old son Gideon sitting comfortably on her belly.

The new baby’s arrival comes almost 14 months after Joy miscarried at 20 weeks in July of 2019.

‘We only had her for 20 weeks, Life is fragile and precious,’ the couple wrote on Instagram at the time. ‘So thankful the Lord gave her to us for that short time! She will be in our hearts forever!’

‘Although we don’t understand why, God has given us unexplainable peace and comfort during this very difficult time. Yes, it still hurts and we have cried countless tears, but we know that we can trust the Lord.

‘We don’t grieve as those who have no hope because we trust that we will see this little one again,’ they wrote. ‘Please pray for continued healing, not only physically but for our hearts as well.’

The young parents named the baby Annabelle, and went on to bury her at his family’s camp in Combs, Arkansas.

Four months later, they conceived again, but waited until March to announce it to the public.

‘Yes… it’s true! [Austin] and I are PREGNANT again!’ Joy Anna wrote on Instagram earlier this year, confirming rumors that began to swirl a couple of weeks before.

‘Ahhh!!! It’s been quite the crazy journey these last few months, but we are so thankful that mom and baby are healthy!’

She also posted a YouTube video, in which she caught fans up on her pregnancy journey.

When she told Austin, she did so by wrapping a positive pregnancy test in a gift box.

But it wasn’t all smooth sailing. Not long into her pregnancy, she started to experience spotting. She went to the doctor, who told her it might be a nonviable pregnancy.

After some anxious waiting, though, Joy Anna and Austin learned that that wasn’t the case — and also found out they were having a daughter.

‘We’re having a girl! I could not believe it. I just started crying,’ Joy Anna said. ‘We’re super excited, nervous, and thankful, all at the same time.’

‘It’s just a huge load lifted off our shoulders, knowing that the tests came back good, came back normally,’ Austin added.

Finally, they finished off the video with the gender reveal they had for family, watching on from their yard as older brother John David dropped a bucked of pink confetti from a helicopter.

She and Austin continued to offer updates on YouTube, taking fans along for the gender reveal and doctor’s appointments.

In July, she celebrated her impending arrival with a baby shower, with her mom, sisters, sisters-in-law, and best friend Carlin Bates coming together for a not-so-socially-distanced party.

Photos from social media show a room decorated with white, yellow, and rose gold balloons, which her family put up ahead of time.

The party appears to have included a rather large group given that the country is in the middle of a pandemic, with everyone gathered together indoors without masks or social distancing.

Pictured at the festivities is Joy Anna’s mom Michelle, as well as her sisters Jana, Jessa, Johanna, Jennifer, Jordyn, and Josie.

Her big sister Jill was also notably in attendance. Jill has been absent from quite a few family gatherings, which her husband Derick Dillard has claimed on numerous occasions is because dad Jim Bob restricts her access to the rest of the family.

Sisters-in-law Lauren and Anna showed up, too, with Anna bringing along daughters Meredith, Mackynzie, and baby Maryella, and Lauren toting her baby, Bella.

Also there was Joy Anna’s longtime friend and fellow reality star Carlin Bates, who had her own first child earlier this year.

Other Instagram pictures show five other guests, bringing the total to at least 21 people.

While the images don’t show any masks or other precautions taken, the group did seem to play some games, including one in which Joy Anna and Carlin competed to change a diaper while holding a phone between their faces and shoulders.

Joy Anna, who is due August 19, also opened gifts, including diapers and dresses.

Pictures don’t show any food, and it doesn’t appear that Joy Anna had any sort of cake. Previously, after her sister-in-law Lauren miscarried at just five weeks, she had an entirely separate cake for ‘Big Brother Asa’ at her baby shower during her next pregnancy.