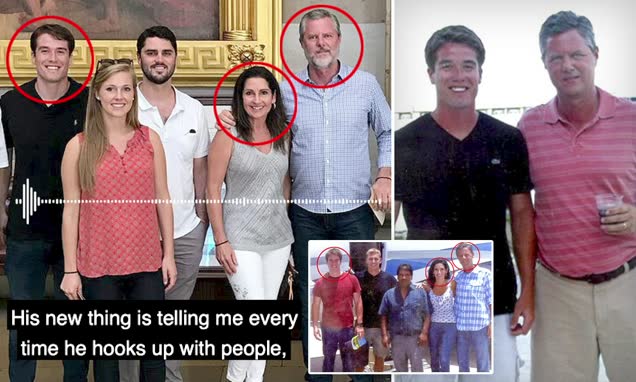 A 2018 phone call where Jerry Falwell Jr. tells the pool boy his wife had been having an affair with not to make her jealous with stories of dating other women has emerged.

It comes hours after Falwell Jr. claimed he had no knowledge of their romance and after pool boy Giancarlo Granda, 29, contradicted him, claiming he sometimes watched them having sex.

Granda spoke out on Monday in an interview with Reuters where he contradicted Falwell Jr’s claims that he was trying to extort the couple, and gave more details about his alleged sexual relationship with them.

He also gave Reuters a recording of a phone call between him and Becki where Jerry is in the background. She complains in the phone call about hearing about his dating life, and said she was in tears ‘for a day’ after he had sex with a Tinder date and ordered her an Uber home.

Jerry chimed in on the call, saying: ‘You’re going to make her jealous Gian.’

It undermines Jerry’s claims that he did not know about the affair when it happened and that it made him ‘upset’ afterwards. He claims he lost 80lbs as a result but that the family decided to keep in touch with Giancarlo because he was extorting them and they felt they could control the situation.

Giancarlo said he was 20 when he met the pair in Miami and that starting in March 2012, he had sex with Falwell’s wife Becki several times a year in hotel rooms, sometimes while Falwell Jr. watched, until 2018.

‘Becki and I developed an intimate relationship and Jerry enjoyed watching from the corner of the room,’ Giancarlo said.

During that time, the trio went into business together with an LGBTQ-friendly hostel in Miami that Giancarlo runs.

He said that he was used as a ‘target’ for the couple’s ‘sexual escapades’ and that he was not trying to extort the pair, even though he threatened to go ‘the kamikaze route’ if they didn’t give him what he wanted.

He sat down with Reuters earlier this month. They went to Falwell Jr. with Giancarlo’s claims, which is what prompted his statement on Sunday night.

Now 29, Granda described the liaisons as frequent – ‘multiple times per year’ – and said the encounters took place at hotels in Miami and New York, and at the Falwells´ home in Virginia.

On Sunday night, Falwell Jr. – a prominent Trump endorser and one of the most influential right-wing Christians in America – told The Washington Examiner that he and his family were being extorted.

He said Becki had an affair with Giancarlo that he had ‘no involvement in’, and that he’d chosen to forgive his wife.

Giancarlo claims the opposite.

He showed Reuters texts from Becki where she said she was ‘missing him like crazy’ and also gave an audio recording of her complaining about hearing about the other women Giancarlo had been intimate with. Falwell Jr. was also on the call and told him that he was going to make his wife ‘jealous’.

‘He´s like telling me every time he hooks up with people. Like I don´t have feelings or something,’ Becki said.

Jerry then chimed in: ‘You’re going to make her jealous.’ Giancarlo replied: ‘I’m not trying to do that.’

He insists he was trying to negotiate a buyout from the hostel business and that he was not extorting the pair.

In one text to them, he said: ‘Since you´re okay with ruining my life, I am going to take the kamikaze route.

‘It really is a shame because I wanted to reach a peaceful resolution and just move on with our lives but if conflict is what you want, then so be it.’

In his statement on Sunday night, Falwell Jr. said, in part: ‘Becki had an inappropriate personal relationship with this person, something in which I was not involved…it was nonetheless very upsetting to learn about.’

His friendship with the Falwells eventually soured, he said, in part because he wanted to dissolve his ties with the couple and fell into a business dispute with them.

Giancarlo first emerged as a figure in the Falwells´ circle two years ago, when BuzzFeed News reported that the couple had befriended Granda and gone into business with him, buying a Miami Beach youth hostel in 2013.

At the time of the BuzzFeed article, a representative of the Falwell family said Granda was ‘offered a share’ in Alton Hostel LLC because he lived in Miami and would act as a manager of the youth hostel. Corporate records show that he currently has a stake in that venture.

After Reuters presented its initial reporting early last week to the Falwells, a lawyer for Jerry Falwell, Michael Bowe, said the evangelical leader ‘categorically denies everything you indicated you intend to publish about him.’

On Sunday night, however, as Reuters was preparing to publish this article, Jerry Falwell issued a statement to the Washington Examiner in which he said that his wife had had an affair with Giancarlo and that Giancarlo had been trying to extort money from the couple over the matter. Giancarlo denies any such intent, saying he was seeking to negotiate a buyout from a business arrangement he says he had with the couple.