People are disgusted at Jerry Falwell Jr. for shaming his wife for committing adultery with ‘pool boy’ Giancarlo Ganda when he approved of it and was taking part as well 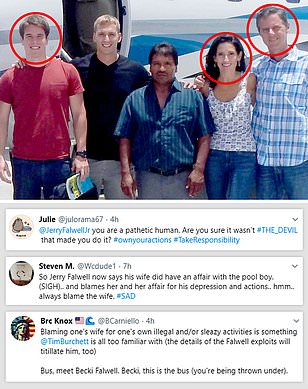 Jerry Falwell Jr. has been admonished for blaming his family’s involvement with a pool boy entirely on his wife and claiming she cheated on him with the younger man when he allegedly watched them having sex.

Falwell Jr., the head of Liberty University, released a statement on Sunday night claiming that only his wife Becki was involved Giancarlo Ganda, a pool boy who the pair met when he was 20 in 2012.

He said Becki and Giancarlo had an affair and that he’d chosen to forgive her for it, describing it as an ‘indiscretion’ that caused him to lose 80lbs when he discovered it because he was so upset.

However, Giancarlo spoke out on Monday to claim that not only did Jerry know about the affair, but that he watched them having sex.

He says he and Becki had sex multiple times a year in hotel rooms around the country for six years.

Now, Jerry – who was put on a leave of absence from the Christian college earlier this year – is being slammed for trying to pin the entire scandal on his wife.

Twitter users erupted in criticism of his ‘holier than thou’ statement.

They slammed him for not only trying to pin the debacle on his wife, but also for telling students at Liberty University to refrain from sex when he may have been participating in it outside of his marriage.

On Sunday night, Falwell Jr. released a lengthy statement to The Washington Examiner, claiming he and his wife were being extorted.

He did not name Giancarlo, but said the person had an affair with Becki.