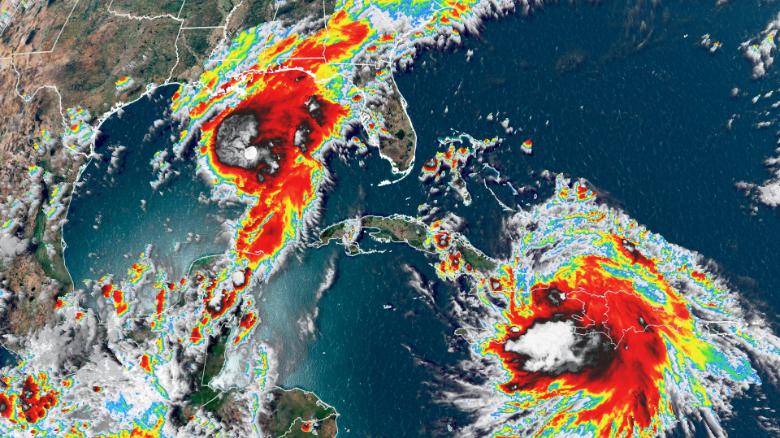 Tropical Storm Marco grew to hurricane strength Sunday, one of two powerful storms marching toward the Gulf Coast and threatening a historic double slam of landfalls within miles of each other.

Hurricane Marco is likely to make landfall in Louisiana late Monday. Tropical Storm Laura is expected to reach hurricane status before it roars into the state Wednesday. National Weather Service Meteorologist Benjamin Schott said such a confluence of storms hasn’t happened in the Gulf of Mexico in recorded history.

Isolated areas could see 15 inches of rain from the two storms, he said.

“We have a very unique situation with two storms that unfortunately are headed to Louisiana,” Gov. John Bel Edwards said Sunday. “They pose a challenge we have quite frankly not seen before.”

Edwards said the “one-two punch” of hurricanes will blanket the state’s coastline with storm surge as high as 10 feet in some areas and prompt flash flooding in others. He said residents should be ready to shelter in place for at least 72 hours, warning that it may not be possible to deploy rescue helicopters and high-water vehicles after Marco’s storm surge if Laura comes in right behind.

Because of the COVID-19 threat, Edwards said, the state plans to activate large shelters with congregate settings only “as a last resort.” Instead, the governor said, he’s working with the federal government to use hotels and motels if large evacuations become necessary.

St. John the Baptist Parish, which includes LaPlace, has had one of the highest COVID-19 death rates in the nation.

“People are still in shock with so many people lost to this virus,” said Larry Soraparu, a former parish councilman. “Now, we have two hurricanes in the Gulf and no one’s sure what’s going to happen.”

He added: “Tensions are rising.”