Biden pledges to end US ‘darkness’ in accepting Democratic nomination 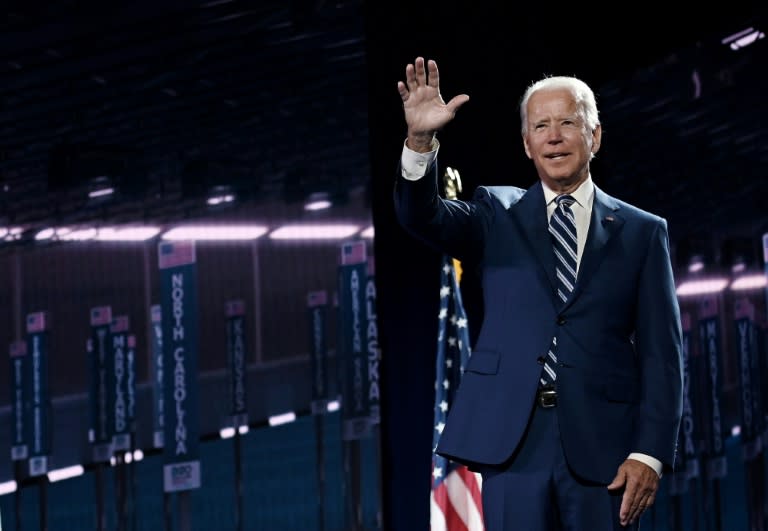 Joe Biden promised Thursday to end the “darkness” of Donald Trump’s presidency in a speech accepting the Democratic nomination with an impassioned call for unity and a return to optimism.

“The current president has cloaked America in darkness for much too long. Too much anger, too much fear, too much division,” Biden said.

“If you entrust me with the presidency, I will draw on the best of us, not the worst. I will be an ally of the light, not the darkness,” he said.

“It’s time for us, for we the people, to come together.”

Speaking in his hometown of Wilmington, Delaware, but with an audience almost entirely online or on television, Biden’s acceptance speech reflected the enormity of the shutdown that has upended life across the United States in the battle against the deadly coronavirus.

And Biden, 77, urged Americans in blistering terms to punish Trump for the chaos that has seen more than 170,000 deaths and economic calamity.

“We lead the world in deaths,” he said in the 22-minute speech, calling Trump’s performance “unforgivable.”

“On day one” of his own presidency, Biden said, he would implement a national COVID-19 plan and mandate mask wearing.

Biden is on his third White House bid after failing to win the nomination in 1988 and 2008.

But after months of relentless mockery from Trump and other Republicans who claim Biden is senile, the veteran politician’s speech was markedly fluent and always full of passion.

Democrats hope the strong performance, as well as the vice presidential nomination of Kamala Harris — the first black woman ever to make it onto the White House ticket of a major party — will deflate those attacks.

Biden leads in almost every national opinion poll and also in the crucial swing states.

But Trump is fighting hard in what is shaping up to be an election of unprecedented ferocity and division.

Speaking to Fox News’s Sean Hannity as the Democratic convention was in full swing, Trump repeated his claim that increased mail-in voting — which Democrats say is needed due to coronavirus fears — will lead to fraud.