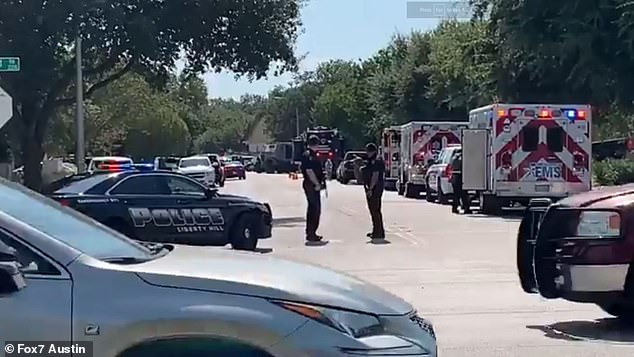 Police in Texas say three officers have been shot and wounded injured in a shooting in Cedar Park, 20 miles outside downtown Austin.

The suspect is barricaded inside a home and the situation remains active.

‘At this time we can confirm three Cedar Park Police Officers have been shot,’ the force tweeted at around 5:20pm local time.

‘They are at a local hospital in stable condition.

‘This remains a very active scene, the subject is not in custody at this time.’

Unconfirmed reports suggested that there may be a hostage situation, with children involved.

Officers are asking residents to avoid the Bagdad Road area, just south of Leander High School, due to the ongoing situation.

Mike Harmon, chief of Cedar Park police, said he had visited the three officers in hospital, and thanked the local community for their support.

He said the trio were in a stable condition.

A law enforcement source at the scene of the shooting told FOX 7 Austin that one officer was shot in the arm.

Another officer was shot in the chest but was protected by his vest.

A third officer has suffered a grazing head wound.

‘We are on scene of a shooting where multiple Cedar Park Police Officers have been shot while responding to a call at a home off Natalie Cove,’ the police tweeted earlier.