Dr Fauci tells Matthew McConaughey that the death toll would be ‘enormous’ if the US tried to achieve herd immunity as a new CDC model shows there could be 189,000 fatalities by September 5 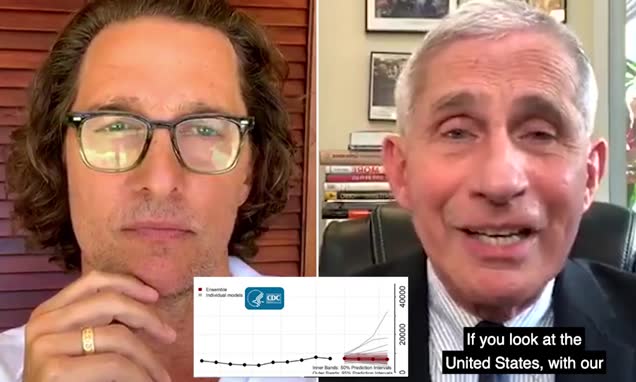 Dr Anthony Fauci explained to Matthew McConaughey on Thursday that the death toll would be ‘enormous’ had the US attempted to achieve herd immunity.

In a discussion with the actor on Instagram, the nation’s top infectious disease expert said: ‘If everyone contracted it, even with the relatively high percentage of people who are without symptoms… a lot of people are going to die.’

‘And that’s the reason why we are against saying “let if fly, let everybody get infected and we’ll be fine” that’s a bad idea,’ Fauci, who is the director of the National Institute of Allergy and Infectious Diseases, added.

His comments come hours after the Centers for Disease Control and Prevention (CDC) released a grim forecast that predicts 189,000 Americans could die from COVID-19 by September 5.