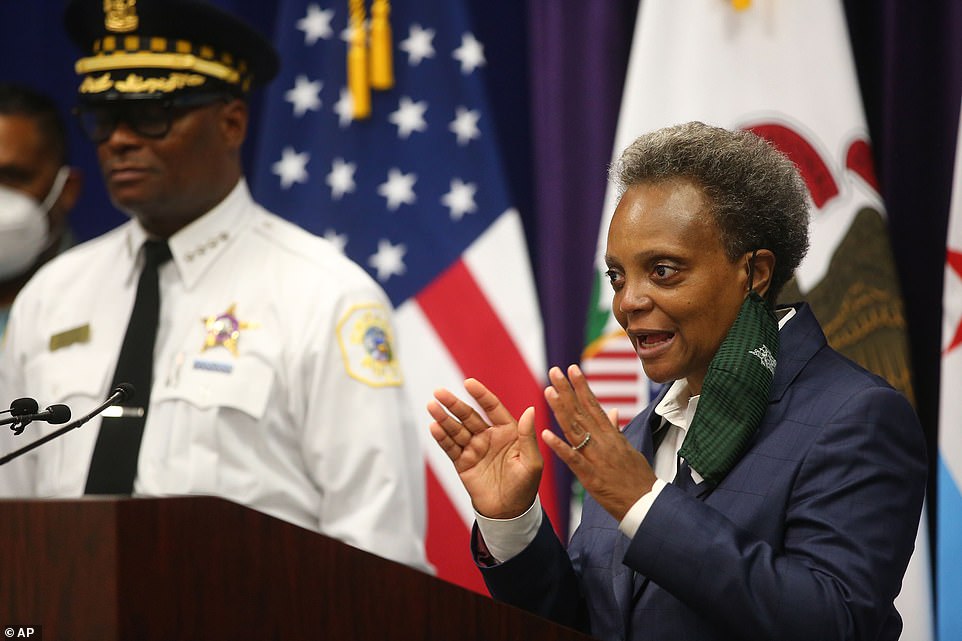 Chicago Mayor Lori Lightfoot warned looters who ransacked the city that they are already being hunted by police who are reviewing HD security camera footage from the chaos which saw more than 100 arrests, attacks on 13 police officers and widespread unrest.

The chaos began on Sunday afternoon when police responded to Englewood where there had been complaints of a man with a gun. The suspect has not been named but was described by police on Monday as a 20-year-old man with a criminal history that includes charges of burglary, child endangerment and assault and battery.

When officers arrived at the scene, he began running and opened fire on them as they pursued him. The cops returned fire, wounding him, and arrested him. He was taken to the hospital and is expected to survive.

A different story spread among residents of the neighborhood who were told that the police officers had inadvertently shot a child. Crowds gathered in protest, creating a tense stand-off that lasted several hours and was described by Deputy Police Chief Yolanda Talley as ‘very hostile’.

In response to that incident, people on social media organized for a caravan of cars to descend on the city’s downtown shopping district to loot. Police found out about the posts and within 15 minutes, were downtown but the violence had begun.

Cars plowed through storefronts to give the crowds easy access and despite there being 400 officers dispatched to the area, the cops struggled to keep up with the crowds.

One officer was attacked with a bottle, another had his nose broken and a group of different officers were shot at by drive-by assailants while trying to arrest other looters. On Monday morning, police were still arresting people at a Best Buy which was among the stores that had been ransacked. Some of the city’s bridges were raised and tunnels were closed while police tried to regain control of the situation.

Mayor Lightfoot abhorred the violence on Monday morning, calling ‘straight-up criminality’ that had nothing to do with peaceful protests. She is resisting calls for the National Guard to be brought in, and says the city’s own law enforcement can handle it.

She warned those involved that police were already scanning HD security camera footage to identify and arrest all those involved, saying sternly at a press conference: ‘Let’s be clear. We are coming for you. We are already at work finding you.’