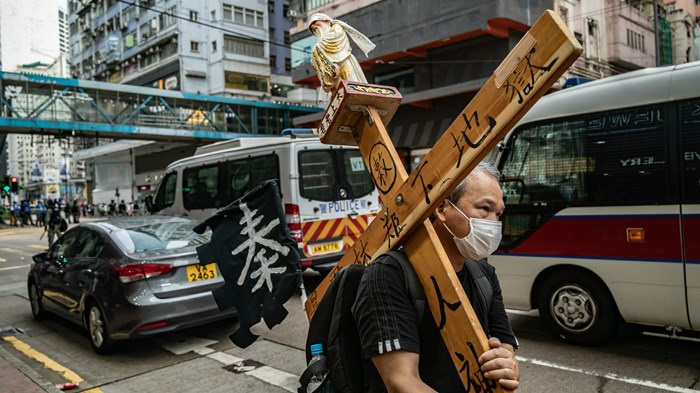 For Christians outside of China who have connections in Hong Kong, or for international ministries with offices there, a new Beijing-imposed security law prompts a raft of troubling questions and unknowns.

The law—which broadly criminalizes any act of secession, subversion, terrorism, and collusion with foreign forces in the Chinese Special Administrative Region—went into effect late on June 30. The first 10 people arrested included a 15-year-old girl and a man who unfurled a Hong Kong independence flag during a demonstration. An additional 360 protesters were also detained in the first 24 hours.

Written in secret by Chinese officials and only made public after it had been passed, the law reclassifies what were previously considered minor infractions as serious crimes, punishable by a life sentence. Damaging public transport facilities, for example, a tactic frequently used by pro-democracy activists in the past year, is now considered an act of terrorism. The law also circumvents Hong Kong’s well-established judicial processes, allowing for warrantless wire-tapping, extradition to the mainland, and closed criminal proceedings.

But Hong Kong residents are not the only ones who should be wary. Buried within the law’s 7,000 words is one statement that seems to extend the reach of the decree far outside of China’s borders: “The law applies to persons who do not have permanent resident status in Hong Kong and commit crimes under this law outside Hong Kong,” reads Article 38.

In other words, anyone in the world could be held accountable for acts of subversion against the Chinese government.

As extraordinary as this provision may sound, it is not unusual for the Chinese Communist Party (CCP) to pass sweeping laws that can be open to broad interpretation.

“I think it’s a trend in China to make these laws vague, so that they can enforce it and interpret it based on what the party desires to accomplish,” Chinese American Luke Wong (a pseudonym), a longtime missionary in China who was detained, interrogated, and deported back to the US last year, told me. “It is also designed to instill fear in the people who have a different opinion, so that they may not rise up. It’s kind of like a shape-shifting cage that the government has total control of.”

So Christians living outside of China now wonder: Is it still safe for them to communicate openly with friends and colleagues in Hong Kong? For years, the territory has served as a staging ground for ministry organizations operating across the region. But now, will they face pressure or persecution, as those in the mainland do? If they are critical of Beijing on social media or in an article such as this, will they be denied entry to Hong Kong—or worse, detained and possibly imprisoned upon landing in Hong Kong?

In the month since the passage of the anti-sedition law, China has already stretched its limits. Despite Hong Kong Chief Executive Carrie Lam’s assurances that “this law will be enforced very stringently,” Chinese officials now claim that 600,000 people—or 8 percent of the city’s entire population—who voted in a primary election for pro-democracy parties on July 12 may have broken the law.

Last week, the Chinese government announced arrest warrants for six pro-democracy activists living abroad, including Samuel Chu, a former pastor who has been a US citizen for 25 years.

“There is a specific provision in the law that prohibits any foreign interference,” Stephen Leung (a pseudonym), a church planter and entrepreneur who collaborates extensively with partners in China, said in an interview with me. “What constitutes foreign interference? You’re a foreigner, and you’ve interfered in some way. That’s pretty broad.” After the passage of the law, Leung is now “really hesitant to go to Hong Kong or China.”

His concern may not be misplaced, given that even the Vatican is worried about ruffling China’s feathers. On Sunday, July 5, Pope Francis had prepared remarks for his regular Angelus address that included comments critical of the new security law in Hong Kong. When he actually gave the address, he skipped over those comments—perhaps out of fear of retribution against the Catholic church’s many bishops in China.

Gee Lowe, the recently retired academic dean of China Evangelical Seminary North America, thinks it’s too soon to know to what extent the CCP will try to impose the law on foreigners. Speaking on his own behalf, he said, “we have no idea how the Beijing authorities will react to people making statements.” As a result, here in the US, “Chinese church leaders are being very careful about it.”

Foreign missionaries and international missions based in Hong Kong have sensed Beijing’s grip tightening long before the passage of the security law. According to Jonathan Lee (a pseudonym), a Chinese American who has been a missionary in China for several years, his US-headquartered ministry stopped holding trainings and conferences in Hong Kong about five years ago, though fellow missionaries continued their outreach activities among the local population.

Then, in 2019, Chinese officials approached Lee’s organization to inform them that their work in Hong Kong was being monitored. “They told us they were watching our colleagues in Hong Kong. They knew what our colleagues were doing,” he explained.

If Chinese officials were already tracking foreign missionaries in Hong Kong a year before it was technically legal, Christians assume such activities will continue and possibly expand now. They fear the heavy persecution that churches, missionaries, and faith-based organizations in China have experienced under President Xi Jinping is a probable harbinger of Hong Kong’s future.

“Beijing is tearing down churches, taking down crosses, putting up portraits of Xi Jinping in churches in mainland China. They are really closing in, becoming more and more restrictive,” said Lowe. “We can safely predict that’s the direction Hong Kong will be heading in.”

Other Christian leaders in Hong Kong, especially those from older generations, have been critical of the strategies employed by protesters—specifically, incidents of vandalism and violence—and how the political movement has divided the church. They defend the new law as justified under China’s rightful oversight of national security (under the Basic Law that governs the former British territory) and look forward to order being restored in their usually peaceful city.