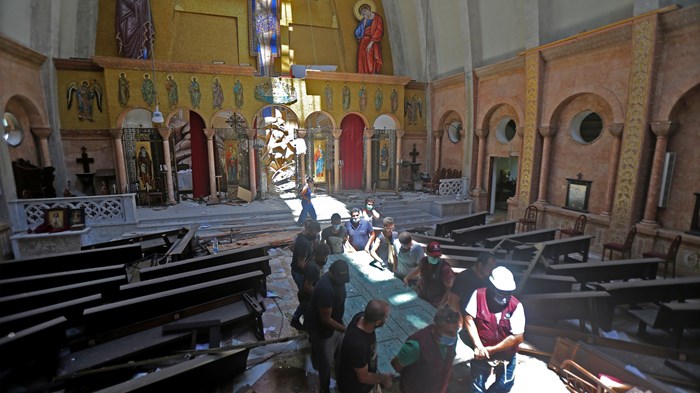 The massive explosion that rocked Beirut on Monday evening has left dozens dead, hundreds injured, and more than 300,000 displaced from their homes.

Millions around the world watched in horror as the detonation of 2,750 tons of confiscated ammonium nitrate laid waste to the Mediterranean port and surrounding neighborhoods. The equivalent of a 3.3-magnitude earthquake was felt deep into the coastal mountains of Lebanon and as far away as Cyprus.

The images of destruction reminded many of the small Middle Eastern nation’s 15-year civil war that lasted from 1975 to 1990.

In addition to interviewing leaders from 12 evangelical ministries in Beirut, Christianity Today also spoke with Joseph Kassab, president of the Supreme Council of the Evangelical Community in Syria and Lebanon. Based in Beirut but born in Aleppo, Syria, Kassab reflected on the damage suffered in Christian neighborhoods, early efforts to assist the suffering, and hope for what this tragedy might produce in the Lebanese church.

These are very difficult days in Lebanon. What happened, and how bad is it?

It is very bad. I’ve been in Lebanon since 1984, experiencing the civil war. This is the first time that one single explosion caused such damage. People were terrified.

Until now, there is no agreement on the explanation, with many speaking according to their political point of view. Some say it was an electrical problem. Some say it was arson. Others assure that they heard jet fighters. We have to wait, hoping that the coming days will provide an answer.

This explosion destroyed so much of Beirut, across sectarian lines. What is the impact on the Christian community?

The areas nearest the port in East Beirut are primarily Christian neighborhoods, and generally poorer than others. But even we here in the mountains suffered broken windows.

One of the worst affected was Jesus Light of the World church in the Qarantina neighborhood, affiliated with the Christian Alliance denomination. But similar was the downtown All Saints Anglican church. And the historic National Evangelical Church had all its stained-glass windows blown out. The pastor was startled by the first vibration, and then the second explosion sent shards down right where he had been standing.

But everyone is affected. Catholics, Orthodox, and as you move a little further away you see the damage in Muslim neighborhoods also.

How difficult will it be to clean up and rebuild?

My niece’s family came and stayed with us because her apartment is a mess. You cannot imagine what happened. Her cupboards fell on top of her as she protected her two-year-old.

There are up to 100 casualties, and I expect more. There are over 3,000 injured. It is a disaster for a small country like Lebanon.

How could such explosive material be kept in the port, stored for the past six years, close to civilian areas and vital sectors of the government? We lost the port, and this is the sector we need most in this time of economic collapse. It is a chronic situation of corruption, mismanagement, and selfish interests.

Lebanese people deserve better leaders. Even the leaders know this.

Back in October, they admitted the country was almost bankrupt; but since then, the situation has only gotten worse. Inflation has risen 85 percent. The government is running out of hard currency in the central bank. And ordinary citizens are denied access to the dollars they have in their personal accounts.

Already many people have lost their jobs, and those still working only receive half their salary. And this morning they woke up having to repair their homes. Where will they get the money from?

We are a bankrupt country, becoming a failed state.