Jerry Falwell Jr. apologizes for unzipped pants photo beside woman who is not his wife whose shorts were also partly unzipped 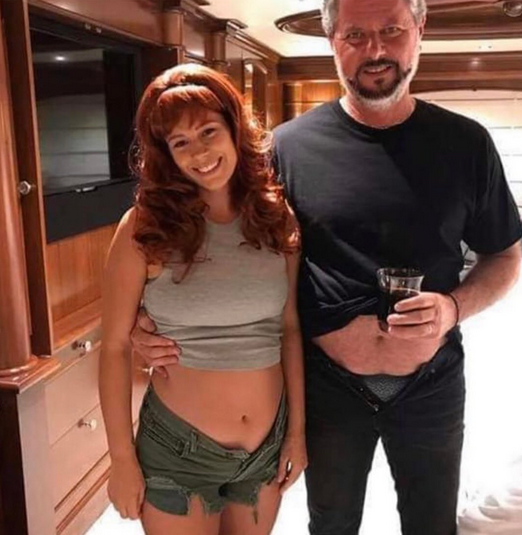 Liberty University President Jerry Falwell Jr. said on Wednesday that he had apologized for posting a photo of him in unzipped pants and arm around a woman — but also defended the incident as a vacation “costume party” that was “just in good fun.”

The now-deleted photo showed Falwell, a leading evangelical supporter of President Donald Trump, with his pants unzipped and his underwear showing beneath, while he had one arm around a woman whose shorts also appeared to be unbuttoned and his other holding a glass with a dark-colored liquid. The photo appeared to be on board a yacht.

The posting — which was quickly withdrawn — drew a sharp backlash and charges of hypocrisy because the evangelical university that he leads prohibits students from having sexual relations outside of a “biblically-ordained” marriage and consuming media with lewd lyrics, sexual content and nudity. The university’s policy also counsels “appropriateness” and “modesty” in how students must dress.

“I’ve apologized to everybody,” Falwell said in an interview on the Morningline show on WLNI 105.9FM, a local radio station in Lynchburg, Va., Falwell’s home town and that of the Liberty campus. “And I’ve promised my kids I’m going to try to be — I’m gonna try to be a good boy from here on out.”

Falwell described the woman in the photo as his “wife’s assistant.” On his Instagram account, Falwell tagged a picture of the woman as Kathleen Stone, who lists on her Facebook account that she works for Liberty University. A university spokesperson did not immediately respond to a request for comment.

“She’s a sweetheart and I should never have put it up and embarrassed her,” Falwell said.

The photo of Falwell appeared to be a parody of the comedy TV show “Trailer Park Boys.” The website Pulpit & Pen also published a video, set to the theme music of the show, that shows Falwell and other yacht guests in costume. The video appears to have been taken by someone on the yacht.

Asked about the reference to the TV show during the interview on Wednesday, Falwell demurred. “Whatever,” he said. “It was a costume party on a — we were on vacation. And, anyway, long story short it was just in good fun. That’s it.”

Falwell’s response comes after the photo drew widespread criticism earlier this week, much of it from liberals but also from some conservatives, including Meghan McCain, the ABC talk show host and daughter of former Sen. John McCain, and S.E. Cupp, the CNN commentator.