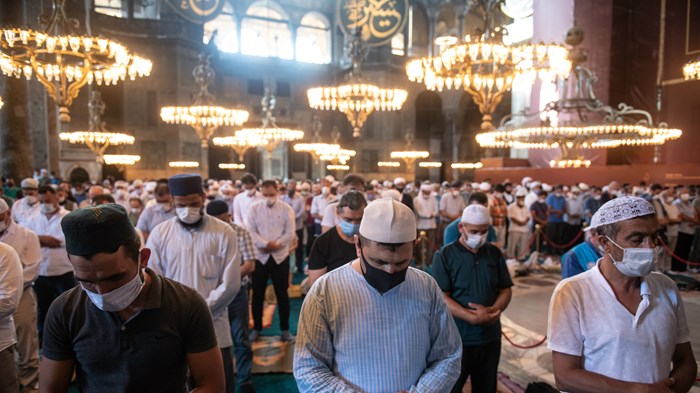 Following his decree earlier this month, Turkish President Recep Erdoğan’s joined a coronavirus-limited 500 worshipers to perform Friday prayers in the sixth-century Byzantine basilica, underneath the covered frescoes of Jesus and the Virgin Mary.

International condemnation resounded after the Turkish Council of State ruled to revert the UNESCO World Heritage Site back to its Islamic status. Conquered in 1453 by Ottoman sultan Mehmed II, the massive church was turned into a museum by the founder of the modern Turkish republic, Kamal Ataturk, in 1934.

Underreported in much of the criticism was a wider complaint.

“The action of the Turkish government evokes heavy memories on the desecration and destruction of holy sites of the Armenian people and other Christian nations by the Ottoman government for centuries,” said Garegin II, Supreme Patriarch and Catholicos of All Armenians.

There are an estimated 11 million Armenians worldwide, including 3 million in their modern nation-state.

Representing the diaspora from the Holy See of Cilicia, in Lebanon, Catholicos Aram I went into more detail.

“Soon after the Armenian Genocide, Turkey confiscated thousands of Armenian churches and transformed them into bars, coffee shops, and public parks,” he said, “ignoring the reactions and appeals of the international community.”

As Erdoğan is doing again now—and not just to the Hagia Sophia.

Turkey has assured the frescoes will be uncovered for all visitors (3.7 million last year) outside of prayer times—and now without a museum entry fee. More than 400 other churches continue to serve the 1 percent of Turks that are Christians.

But Erdoğan’s remarks in Turkish revealed a wider agenda.

“The resurrection of Hagia Sophia is the sound of Muslims’ footsteps all around the world,” he said, “… a salute to all those symbolic cities of civilization from Bukhara to Andalusia.”

The geography stretches from Central Asia to Spain, casting Erdoğan in the shadow of the caliphs. And the date of first prayers, June 24, corresponds to the signing of the 1923 Lausanne Treaty that established the Republic of Turkey—ending the Ottoman Empire and 1,300 years of the Islamic caliphate.

Erdoğan—who as a boy dreamed of restoring the Hagia Sophia as a mosque—has hinted the treaty now constricts Turkish sovereignty. And while there is no suggestion Turkey will undo its provisions to recognize its Armenian Orthodox, Greek Orthodox, and Jewish communities—with constitutional guarantees for freedom of religion—renewing Islamic prayers represents a long history of disregard toward their Christian cultural heritage.

“I’m not surprised by the declaration of Erdoğan, it was very much in line with historic Turkish policy,” said Arda Ekmekji, a Sorbonne-educated archaeologist and dean of arts and sciences at Lebanon’s Armenian evangelical Haigazian University.

“Ataturk was the only exception to extremist Turks camouflaged as Europeans.”

Ekmekji, author of Towards Golgotha, a translation of her grandfather’s journey from Izmir to Jerusalem fleeing genocide, highlighted the 1913-14 Armenian Orthodox Patriarchate census in Turkey.

Following the genocide, she said, their homes were tallied and assigned by number to relocated Balkan Muslims. Laws were passed to transfer ownership of “abandoned” properties.

And while some religious buildings were able to be kept by church-based foundations, the law required a set number of local stakeholders. As the population dwindled, these also passed to the state.

In 2005, the Turkish government prevented research into original property deeds.

“The Ottoman records … must be sealed and not available to the public, as they have the potential to be exploited by alleged genocide claims and property claims against the State Charitable Foundation assets,” read the order.

“Opening them to general public use is against state interests.”

Today, Turkey hosts only 75,000 ethnic Armenian citizens, with less than 15 active churches. Whereas most of eastern Turkey used to be known as Western Armenia, the vast majority now live in Istanbul.

One such basilica could fit inside the Hagia Sophia. The 7th century Cathedral of Mren, located near Kars on the Armenian border, like others, “could crumble to the ground any day now,” said Christina Maranci, professor of Armenian Art and Architecture at Tufts University.

She believes Turkish policy toward Armenian heritage is often one of “slow bureaucracy and purposeful neglect.”

The former is to blame, she says, for the three years she spent obtaining permission to do 3-D laser scanning of Mren. This imaging technique is often the first step in a restoration process. But it can also be the final, lasting memory, should the structures collapse.

The latter is seen through a quote given by a frustrated Turkish Minister of Culture.

“What we are up against is an undeclared policy by certain narrow-minded individuals within the state, of discrimination against Armenian monuments,” said Husseyin Celik, in 2002.

“The fear of these policymakers is that if Christian sites are restored, this will prove that Armenians once lived here and revive Armenian claims on our land.”

But there is more than just neglect and bureaucracy; there is also appropriation. While Mren has been left alone to decay, Maranci recalled early-career visits to the 10th century Cathedral of the Holy Apostles in Kars, which in 1993 was turned into a mosque.