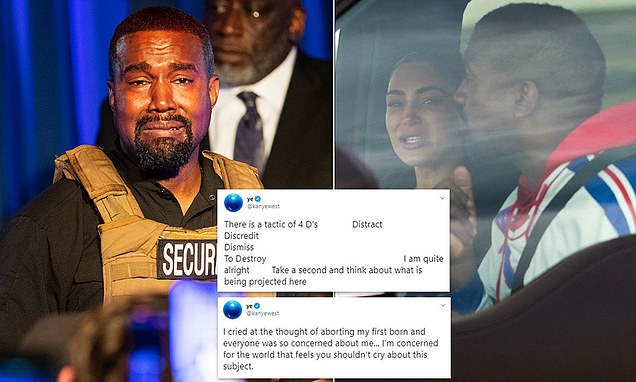 Kanye West has taken to Twitter to insist that his tears over abortion at his presidential rally were not a meltdown, and voiced ‘concern for the world that feels you shouldn’t cry about this.’

He added backlash over his comments were an attempt to ‘Distract, Discredit, Dismiss To Destroy.’

The 43-year-old rapper’s latest posts ended six days of Twitter silence, which followed a string of outbursts on the social media site where he accused his wife Kim Kardashian-West of trying to lock him up in hospital.

The couple are currently living apart and Kanye’s latest tweets come just days after Kim flew from LA to his ranch in Wyoming for a tearful meet up.

Reports swirled that Kim was allegedly ‘torn’ about divorcing Kanye amid the firestorm of negative media attention.

At his July 19 rally in South Carolina, he had revealed that Kim had considered aborting their daughter North, but he stopped her after getting a ‘message from God’.

Today, Kanye wrote: ‘I cried at the thought of aborting my first born and everyone was so concerned about me. I’m concerned for the world that feels you shouldn’t cry about this subject.’

In a second tweet, Kanye added: There is a tactic of 4 D’s: Distract, Discredit, Dismiss To Destroy.

‘I am quite alright Take a second and think about what is being projected here.’

In his third tweet, he shared an article from the New York Post about the Planned Parenthood of Greater New York removing Margaret Sanger’s name from a Lower Manhattan clinic.

Sanger,’ who created organizations that grew into Planned Parenthood, will have her name removed because of her connection to ‘eugenics.

On Monday, Kanye and Kim were spotted having an emotional conversation, after his wife flew to Cody, Wyoming, for crisis talks.

It is the first time that the married couple has been pictured together since before his campaign rally in North Charleston, South Carolina, where he officially launched his unlikely bid for presidency.

The pair – who share children North, seven; Saint, four; Chicago, two; and Psalm, one – were seen having what appears to be crisis talks in his car after leaving a Wendy’s fast-food restaurant near his $14 million ranch.

Most recently, Kim hit back at rumors she was ‘torn’ about possibly divorcing Kanye.

A representative for the mother-of-four has shut down the claims on the star’s behalf, telling MailOnline the reports are ‘absolutely not true’.

In the report, shared by People, a source is quoted as saying: ‘She isn’t getting back what she needs from Kanye. She was to the point that she flew to Cody to basically tell him their marriage is over and to say goodbye.’

People reports that musician and fashion designer Kanye is eager to work on their marriage, recently issuing a public apology to her on Twitter after sharing the personal news that Kim contemplated aborting their oldest child.

However, a source claimed the apology is as far as his reparative efforts have gone, explaining: ‘He doesn’t seem to get what she is saying. He hasn’t changed anything that she told him needs to change.’

‘Kim is very torn,’ added the source. ‘The last thing she wants is to be divorced with four kids. She knows that she will be fine financially, but her concerns are the kids and the partnership. She is moving towards a divorce, but who knows if she will actually sign papers.’