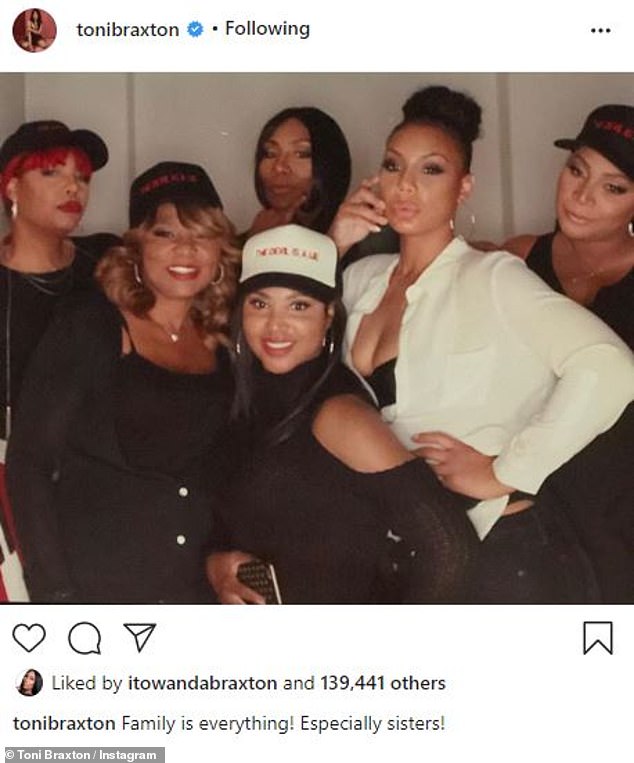 Toni Braxton sent a subtle message of support to her family as she broke her silence for the first time since sister Tamar was hospitalized after an alleged suicide attempt.

Tamar, 43, was rushed to the hospital on July 16th after boyfriend David Adefso found her unresponsive in their hotel room at LA’s Ritz Carlton.

Sister Trina endorsed the message by commenting a series of red heart emojis, making in clear that Tamar was on her mind.

Last week, it was reported that Tamar, 43, is now ‘alert and responsive’ following her alleged suicide attempt, and has now been transferred to a new hospital facility to receive ‘specialized mental health treatment.’

Tamar is said to be speaking to medical professionals about what happened in the days leading up to her hospitalization, The Blast reports.

A source close to the situation tells the outlet that Tamar is now ‘awake and alert’ and is being transferred to a ‘new hospital facility where she can receive more specialized mental health treatment.’

Meanwhile, a spokesperson for the reality star told the outlet: ‘Tamar has been transferred to another facility for further evaluation and treatment,’ adding: ‘Out of respect for Tamar’s privacy and that of her family, no additional information is available at this time.’

The report adds that Tamar will likely stay in the facility until it is determined what kind of treatment she needs.

Earlier this month, the reality star was staying with boyfriend David Adefeso at the Ritz Carlton in downtown LA when he found her ‘unresponsive’.

The Blast reported that David called 911 saying that Tamar had been drinking and had taken an unknown amount of prescription pills.

The site reported: ‘Ambulances then arrived at the hotel and took her to the hospital. Sources have claimed that David believes that it was possible suicide attempt.’