Openly lesbian Ellen DeGeneres talks about ‘not wanting to pay her staff overtime’ in resurfaced interview from 2013 – as she apologizes to her team amid a probe into ‘toxic, bullying’ workplace 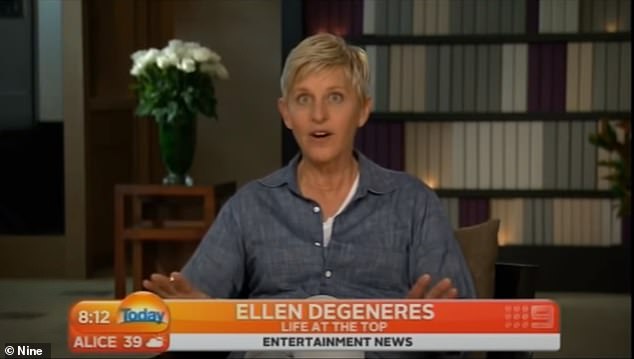 Ellen DeGeneres joked about not wanting to pay her staff overtime in an Australian TV interview from 2013 – seven years before her employees went public with allegations of racism, bullying and a ‘toxic environment’ behind the scenes of her daytime talk show.

The 62-year-old, who hasn’t been accused of any wrongdoing herself but apologised in a letter to staff on Thursday, told Today show entertainment reporter Richard Wilkins that she wanted ‘everybody to work really, really hard… but not too hard that I have to pay them overtime.’

She made the comments during a sit-down chat in Melbourne that was reportedly fraught by disruptions and tension, according to Today’s then-executive producer.

When the American TV personality joked about having to pay overtime, her staff could be heard laughing loudly in the background.

Ellen made the remark after being thrown a softball question by Wilkins, who said: ‘Your TV show is a smash; we love it. How hard do you have to work to make it look that easy?’

She replied: ‘Um, we work heard. I mean, we, you know, I won’t fool you, we work… I want everybody to work really, really hard. Hard enough that I know they’re doing all they can, but not too hard that I have to pay them overtime.

‘I mean, I draw the line at like, “Okay, go home. That’s good… good enough!” So, you know, we all work very hard because we’re really proud of what we do.

‘And I’ve always said from the very beginning: I want the show to be a great show whether it’s on in the middle of the day or when they come home at night and people have [recorded] it and it’s just as good as a late-night show.’

She continued: ‘I want it to be an entertaining show with celebrities, which is great, but I want regular people, I want to help people, I want to play games… We really constantly try to improve every single day. We want the show tomorrow to be a better show than the show we did today.’