(RNS) — President Donald Trump’s appeal to religious conservatives is a cornerstone of his political identity. But Joe Biden is a different kind of foe than Trump has faced before: one who makes faith a central part of his persona — often literally wearing it on his sleeve.

In fact, Biden’s practice of carrying a rosary that belonged to his late son Beau caught the attention of one of his Democratic presidential rivals when the two were awaiting a debate last year. Standing backstage next to Biden, Pete Buttigieg asked the lifelong Catholic about the prayer beads and fell into a conversation about loss, family and faith.

Biden “often talks about the comfort and meaning that he’s drawn from faith,” said Buttigieg, Biden’s Democratic primary rival-turned-endorser. “That’s something that will resonate with Americans a lot more than usual.”

Democrats are betting on Biden’s evident comfort with faith as a powerful point of contrast in his battle against Trump. The faith-focused work underway within Biden’s campaign suggests that, while he may not significantly undercut the president’s popularity among white evangelicals, he could chip away at Trump’s base by appealing to pockets of conservative faithful. Biden’s identity as “a very devout Catholic and person of deep faith,” Deputy Political Director John McCarthy said, is “baked into the core messaging and core functions of the campaign.”

Biden launched his White House bid by framing his campaign as a fight for “the soul of the nation,” a subtle invocation of the Catholic beliefs that have guided his life. This year alone, his campaign has released three digital ads focused on faith, including one that credits his religious practices with instilling a “sense of solace.”

It’s a notable contrast with Hillary Clinton, who lost to Trump after a 2016 campaign that largely sidelined her Methodist faith compared to past Democratic candidates such as President Barack Obama.

This year, as Trump promises to be evangelicals’ “champion” on policy, Biden is making a less transactional play for religious support — banking instead on a beliefs-focused brand in hopes that it will be more persuasive than outright agreement on an agenda. 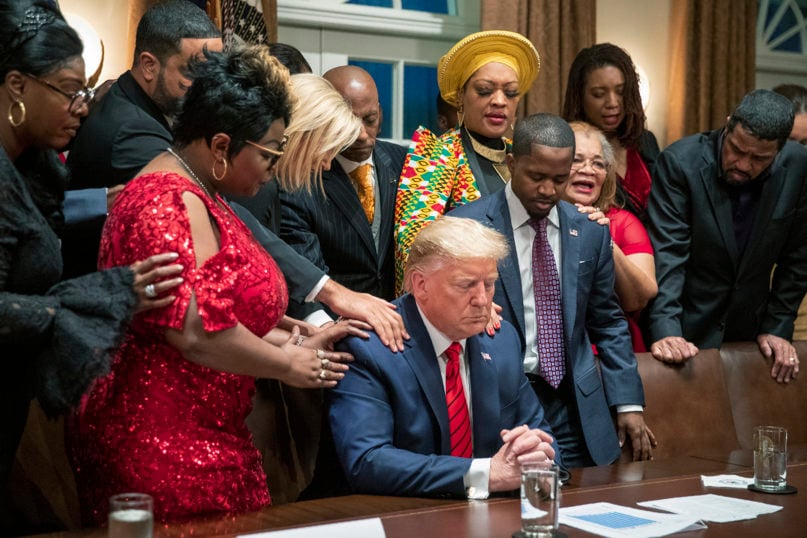 In this Thursday, Feb. 27, 2020, file photo, Black leaders say a prayer with President Donald Trump as they end a meeting in the Cabinet Room of the White House, in Washington. Trump’s appeal to religious conservatives is a cornerstone of his political identity. But Joe Biden is a different kind of foe than Trump has faced before: one who makes faith a central part of his persona – often literally wearing it on his sleeve. (AP Photo/Manuel Balce Ceneta, File)

“For faith and values voters,” McCarthy said, Biden’s spiritual authenticity is “the quality they’re looking for.” They might disagree with Biden on a particular issue, he added, but can connect with the former vice president because of a shared worldview.

Whether Biden’s religiosity is enough to counteract potential policy disagreements may depend on the issue in question. The presumptive Democratic nominee’s shift leftward on federal funding for abortions is a potential liability with evangelicals as well as many Catholics, for example: In October, a South Carolina priest reportedly denied Biden Communion because of his stance on the issue.

But Biden has also used moral language and even quoted Pope Francis when discussing other issues that many Catholics support, such as immigration reform, expanding access to health care and taking action on climate change.

“My faith teaches me that we should be a nation that not only accepts the truth of the climate crisis, but leads the world in addressing it,” Biden wrote in a December Religion News Service editorial. 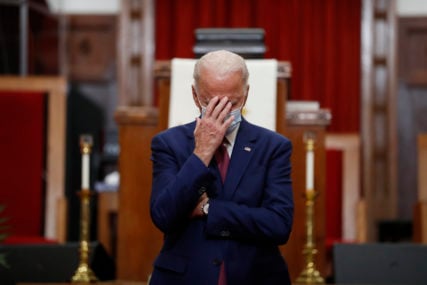 In this Monday, June 1, 2020, file photo, Democratic
presidential candidate and former Vice President Joe
Biden touches his face as he speaks to members of the
clergy and community leaders at Bethel AME Church in
Wilmington, Delaware. (AP Photo/Andrew Harnik, File)

In addition, as the coronavirus pandemic and unrest over racial injustice roil Trump’s presidency this summer, Biden has benefited from an opening to claim the moral high ground. Joshua DuBois, who led religious outreach for former President Barack Obama’s 2008 campaign and first term in office, described Trump’s twin challenges as “the perfect storm” when it comes to projecting leadership to many people of faith.

DuBois argued that the current political climate — combined with the recent Supreme Court rulings on abortion rights and LGBTQ rights that have frustrated many conservatives — has created “a more difficult landscape when it comes to people of faith than the Trump campaign would have liked and expected.”

Biden, DuBois explained, could make “small but meaningful gains” among white evangelicals whose support for Trump has fluctuated by as many as 15 points in recent polls. For example, the president’s Bible photo op in front of St. John’s Episcopal Church in June, which occurred only after hundreds of demonstrators were forcibly cleared from Lafayette Square and a priest expelled from the church, was panned even by prominent evangelical supporters of Trump.

For those believers, DuBois added, Biden could contrast himself as “the type of person who’s going to speak to our better angels.”

Buttigieg, former mayor of South Bend, Indiana, agreed that the presumptive Democratic nominee has a “huge opportunity” to break through with religious voters and lauded Biden for releasing a specific agenda aimed at fellow Catholics.