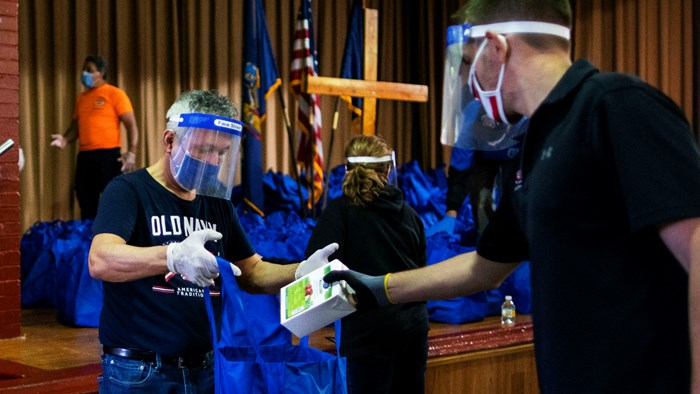 Well over a half million pastors, church staff members, and ministry employees kept their jobs and continued serving their communities during the pandemic thanks to Paycheck Protection Program (PPP) loans, according to a list released last week.

As part of the Coronavirus Aid, Relief, and Economic Security (CARES) Act passed in March, the government offered grants to cover payroll costs for employers, including religious organizations, as a way to keep the economy going and reduce layoffs.

It was the first time the US government had offered to cover the salaries of clergy and ministry workers as part of a stimulus. Some critics—including within the church—discouraged Christian organizations from accepting government funds due to concerns over church-state separation, while others saw it as a way churches and charities to continue to meet community needs during the pandemic.

A list released Wednesday by the Small Business Administration (SBA) showed that at least 11,500 Christian organizations took advantage of the opportunity and received loans of $150,000 or more.

The list was culled based on a keyword search of terminology including church, Christian, Catholic, and diocese, so the totals do not include ministries without Christian wording in their names or those that received smaller loans. More than 80 percent of the 5 million US employers that were granted PPP loans took in less than $150,000, according to the Associated Press, and weren’t included in the recent data.

Through the program, companies and organizations with fewer than 500 employees could request up to two and a half months of payroll costs (excluding salaries above $100,000) to offset the economic hit of the coronavirus shutdowns. Most churches and ministries on the list fell in the $150,000 to $300,000 range. Using the federal funds, the average church retained about 60 jobs.

A few megachurches and denominations ranked among the largest stimulus loan amounts, taking loans of over $5 million. They include Willow Creek Church in Chicago, which preserved 353 jobs, and Life.Church in Edmond, Oklahoma, which kept 451 jobs.

The stimulus loans do not need to be repaid if used for eligible payroll and operations expenses. 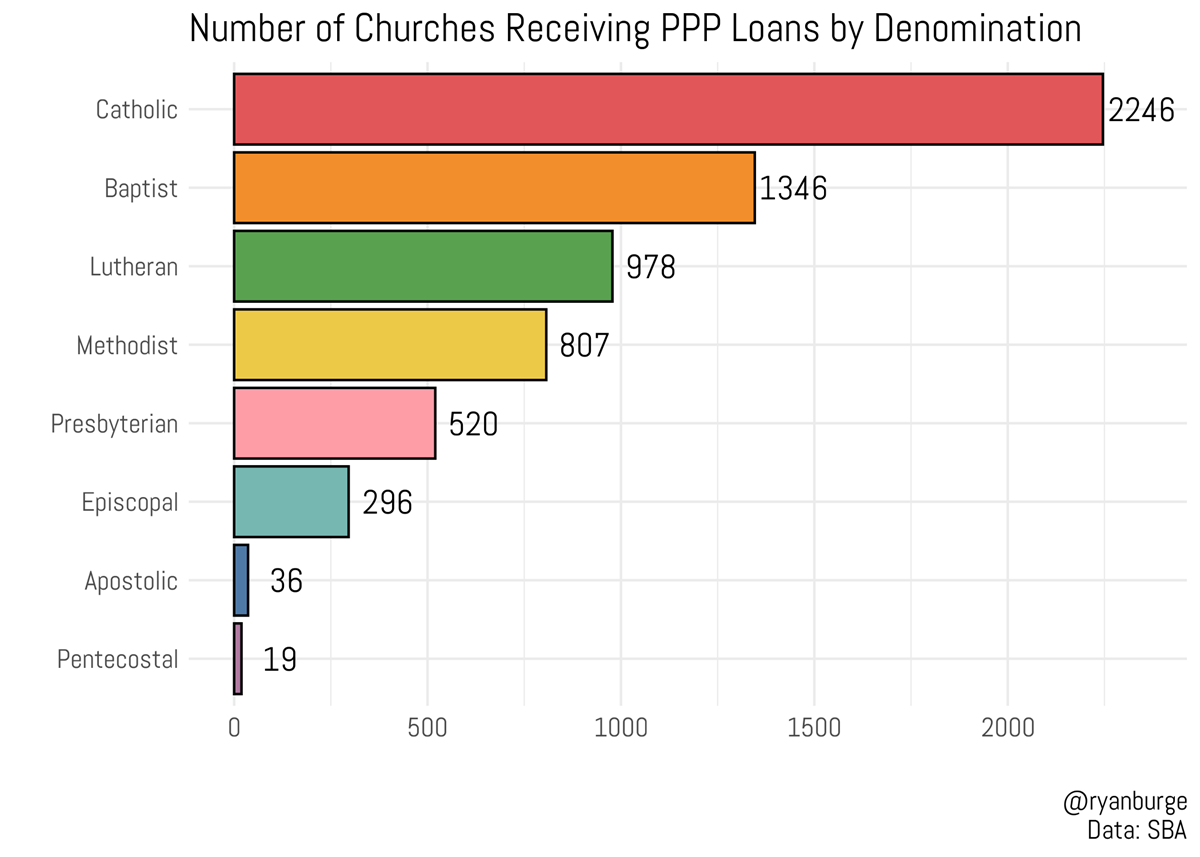 Of the churches whose names included denominational markers, Catholic and Baptist congregations were the most common beneficiaries. More than 2,000 Catholic churches received PPP loans, as did more than 1,000 Baptist churches. The rankings reflect Christian affiliation in the US—around 20 percent of the country is Catholic, while around 15 percent belongs to Baptist denominations (across evangelical, mainline, and historically black Protestant traditions), according to the Pew Research Center. 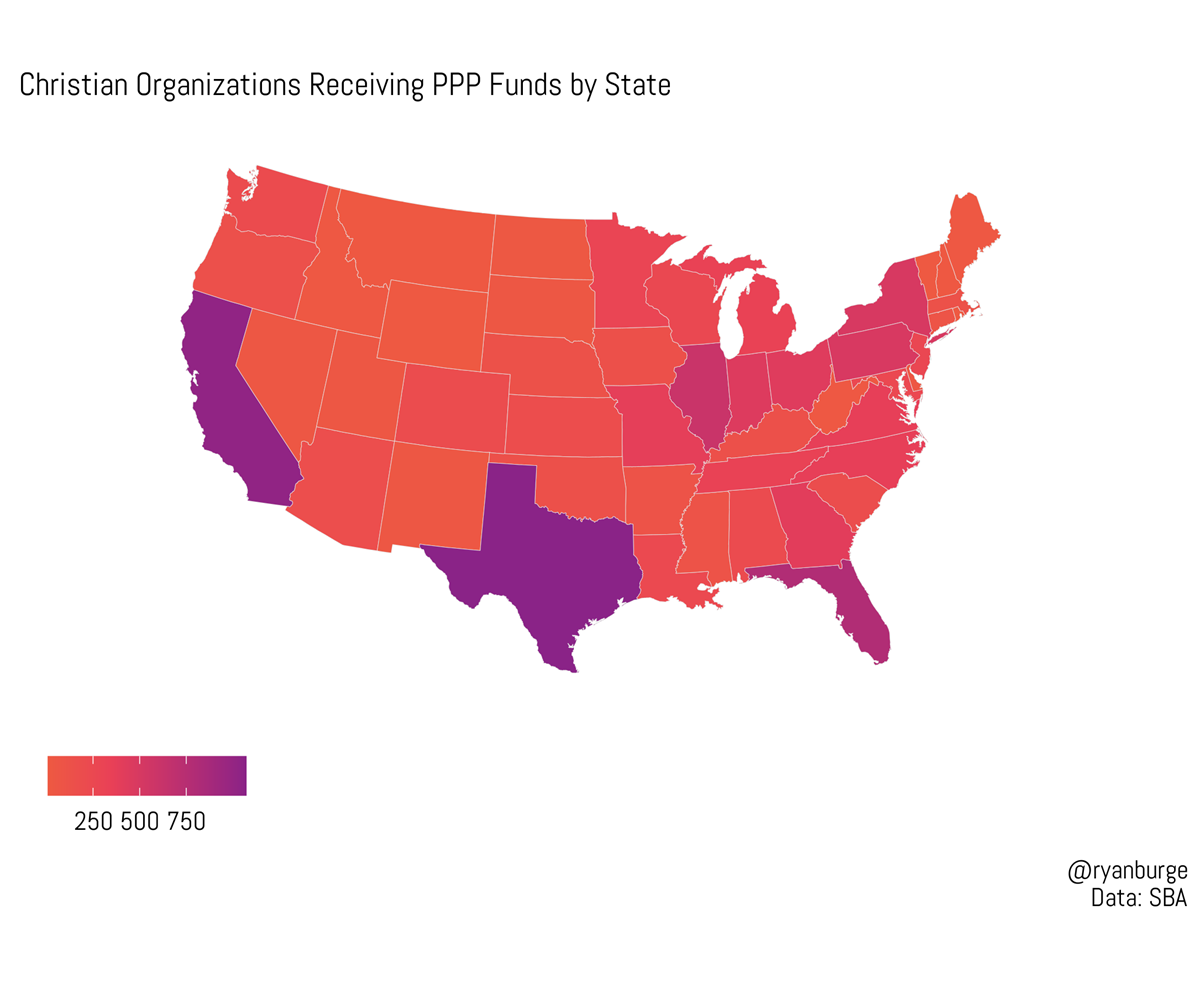 The most populous states saw the most religious organizations taking funds and the most jobs saved.

Texas had 1,072 Christian organizations that received PPP funds, and California was close behind at 1,025. Those recipients indicated the funds were used to retain nearly 70,000 jobs in Texas and nearly 60,000 in California.

Among the biggest Christian employers taking advantage of the stimulus opportunities in those states were Catholic Charities of San Francisco, which retained 500 jobs through the program, and First Baptist Church of Dallas, which recorded 293 jobs being saved through a loan of between $2 million and $5 million from the PPP.

Other large states followed, with Florida at 869 Christian organizations and Illinois at 643.