There’s a devil loose: Family of tech millionaire beheaded by a hitman in a ninja outfit say they ‘cannot fathom’ why he was targeted as they beg the NYPD to capture his ‘evil’ killer 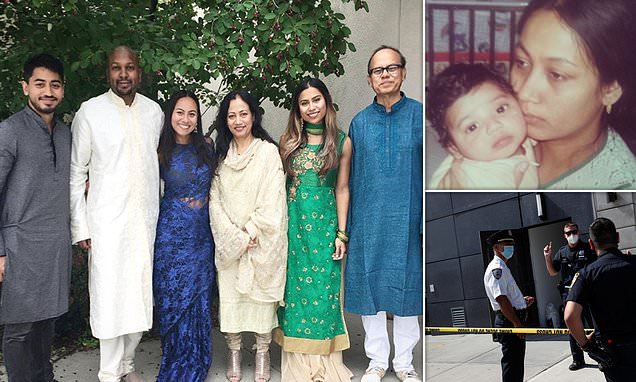 The family of a tech tycoon have begged the NYPD to capture his ‘evil’ killer after the 33-year-old was dismembered by a hitman in a ninja outfit.

Fahim Saleh’s limbs and head were found shorn from his torso by his sister when she arrived at the entrepreneur’s $2.2 million apartment on East Houston in Manhattan’s Lower East Side on Tuesday.

Detectives believe the professional killer may have fled the gruesome scene, leaving his electric saw behind, when Saleh’s sister arrived unexpectedly to check on him that afternoon.

‘The headlines talk about a crime we still cannot fathom,’ the family said in its statement. ‘No words or actions to provide any of us comfort except the capture of the person who exhibited nothing short of evil upon our loved one.’

It continued: ‘We need and urge the NYPD and other members of law enforcement to work diligently to get to the bottom of this horrific crime and bring justice for Fahim…

‘Fahim is more than what you are reading. He is so much more. His brilliant and innovative mind took everyone who was a part of his world on a journey and he made sure never to leave anyone behind.’

Among Saleh’s businesses was a motorbike taxi hailing in Nigeria which had recently encountered financial hardhship, and he had also invested in ride-sharing companies in Colombia.

At the time of his death, he was being sued by a former prison guard turned criminal who was jailed for using his app PrankDial to secretly record and listen to employees’ phone calls.

The app let Kirk Eady, the former deputy director of Hudson County Correctional Facility, place a call between two employees without them knowing he was behind it, then listen to whatever they said.

He listened to their complaints about him and about their jobs then retaliated against them in the workplace, according to prosecutors.

He was jailed for 15 months and in 2017, sued Saleh for fraud, claiming the app made him think what he was doing was legal.

Saleh’s sister arrived at his apartment on East Houston in Manhattan’s Lower East Side at 3.30pm on Tuesday and found her brother’s remains in plastic bags.

His limbs had been severed and his head had been cut off from his torso.