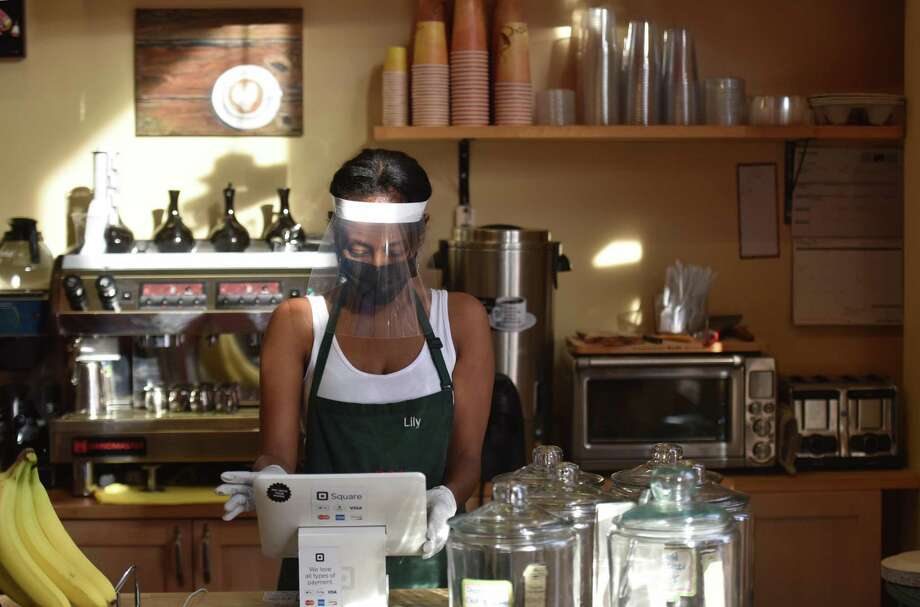 Lily Damtew had resolved to permanently shutter her Ethiopian coffee shop after a maskless man spat at her feet and hurled chicken and rice at her window when she asked him to cover his face. How could she brew coffee and cut quiche, she thought, in fear that he would return with a vengeance?

But on Saturday, just before 7:30 a.m., six days after the incident at Abyssinia Market and Coffee House, she flipped her wooden door sign to “Open” and stood armed with a mask, a face shield and three neighborhood friends.

“I see you’re open. That takes a lot of courage,” said Mark Lewis, the first customer of the day, who ordered an almond croissant that filled the room with an aroma of butter and sugar.

“It was this neighborhood that changed my mind,” Damtew replied. She gestured to the rows of Post-it notes with well-wishes that covered her storefront in Old Town Alexandria, Va. “But I was scared.”

Damtew’s experience, part of the coronavirus culture war over face coverings, reflects a growing problem for retail and service workers across the country who are yelled at and sometimes assaulted after asking patrons to wear masks. They have become the primary enforcers for social distancing guidelines inside restaurants and shops, often drawing the ire of people who think mask requirements infringe on their rights.

In Florida, a maskless man was recorded on video shoving a Walmart employee who tried to block him from entering the store. At a Family Dollar store in Michigan, a security guard was killed after trying to enforce mask requirements. A Starbucks customer in California launched an expletive-laden tirade and social media blast against a barista who asked that she wear a mask.

Days after the incident at Abyssinia Market and Coffee House, the owner of the Greek Spot restaurant in Washington reported on Facebook that a customer had thrown plexiglass at an employee who tried to enforce social distancing guidelines.

About a week earlier, at Ted’s Bulletin in Fairfax County, Va., a customer threatened to use a fraudulent “mask exemption card” to enter the restaurant barefaced, a restaurant manager said.

Local business owners say the majority of patrons gladly adhere to public health guidelines, but the minority who refuse are leaving retail and service workers frustrated and scared as coronavirus cases show signs of rebounding in the region.

“A lot of us are nervous to come back to work, and then we finally do and this is the treatment we get?” said Andrew Ceacatura, a bartender at a Ted’s Bulletin in Washington. “It is soul-crushing, to be honest.”

Ceacatura wore a mask with a smile on it for his bartending shift Thursday night. But beneath the artificial grin, he braced himself for customers to walk in with a mask dangling from their chins, as they had every few days since indoor dining in the District of Columbia reopened June 23.

During a brunch shift last week, he said, he asked an older woman three times to “make sure she had her mask on.” She walked out. On Saturday, he and a manager pleaded with a young woman ordering a boozy milkshake to pull her mask over her nose. She stared them down as she put it on and stormed out of the building. Ceacatura said he refused to work the Sunday brunch shift recently, for the first time in 3 1/2 years, because “whenever it is busy and stressful, that is when things tend to boil over.”