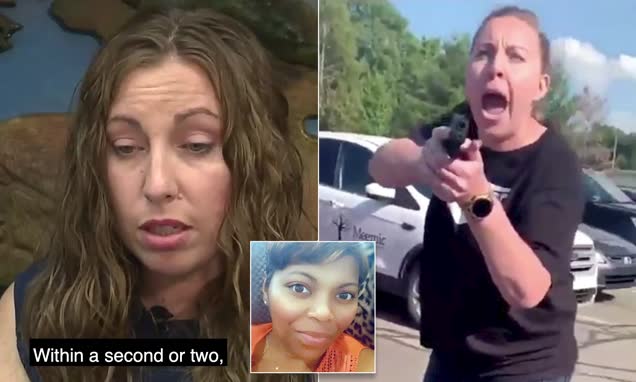 A white woman who was charged after she was filmed pulling a gun on an unarmed black woman and her daughters broke down in tears during a televised interview in which she describes how she feared for her life after the family blocked her from getting into her car and then started banging on it when she was inside.

Jillian Wuestenberg, 32, and her husband, Eric Wuestenberg, 42, have been charged with felonious assault stemming from the July 1 confrontation in Michigan, but they say they are the victims of ‘ethnic intimidation’ at the hands of Takelia Hill and her family.

Cellphone video captured the confrontation outside of a Chipotle restaurant in Orion Township, about 40 miles northwest of Detroit.

Jillian Wuestenberg can be seen outside her vehicle shouting, ‘Get the (expletive) away! Get away!’ while pointing a handgun.

She eventually gets back into her vehicle, which her husband drives away.

Hill, who is black, has said the confrontation started when Jillian Wuestenberg bumped into Hill’s teenage daughter as they were entering the restaurant.

Jillian Wuestenberg told Detroit television station WXYZ on Thursday that she was fearful when the Hill family members blocked her from getting into her vehicle and then banged on the back of it.

‘Within moments, a second or two, I had multiple people within two feet of me and I just remember thinking I’m not going home tonight,’ Wuestenberg said.

She was asked what she meant to do when the video shows her loading a round into the chamber of her handgun and pointing it at the Hill family.

‘That meant I’m about to die and I don’t want to die,’ Wuestenberg said.

Christopher Quinn, an attorney for Takelia Hill, declined to allow her to be interviewed Friday by The Associated Press because the court proceedings are pending.

Quinn said the cellphone video taken by Hill does not show that the Wuestenbergs’ lives were threatened by Hill and her daughters, who were unarmed.