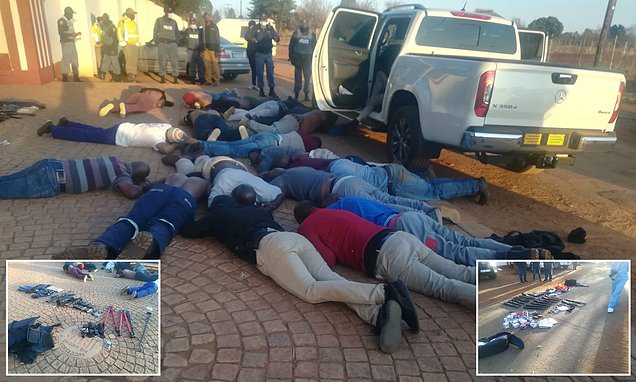 Five people have been killed and dozens arrested in an ongoing church massacre in Johannesburg.

The bloodbath took place at the International Pentecost Holiness Church in Zuurbekom, and specialised police and a heavily-armed national defence force remain at the scene.

It is believed the killings came amid a leadership battle at the church, as officers scrambled to the church at 3am local time following reports that 200 people were taken hostage.

Four people were discovered ‘shot and burned to death in a car’ and a security guard was shot dead in another car, a statement said.

Six other people were also injured in the attack.

It is not yet clear if those killed were among the assailants or hostages.

Forty people – including members of the police, defence forces, and correctional services – have been arrested and more than 30 firearms seized, police said.

Horrifying images released by police show suspects laying face down on the ground with hands on their heads.

Another image reveals guns stacked on the floor next to what look like boxes of ammunition.

Authorities urged the public to steer clear of the area.

Television station eNCA said there had been a leadership dispute at the church and cited a church official as saying roughly 200 people had been taken hostage.

Police said they rescued men, women and children who had been held hostage and appeared to have been living at the church.

The national police commissioner says the response by security forces ‘averted what could have been a more severe bloodbath.’