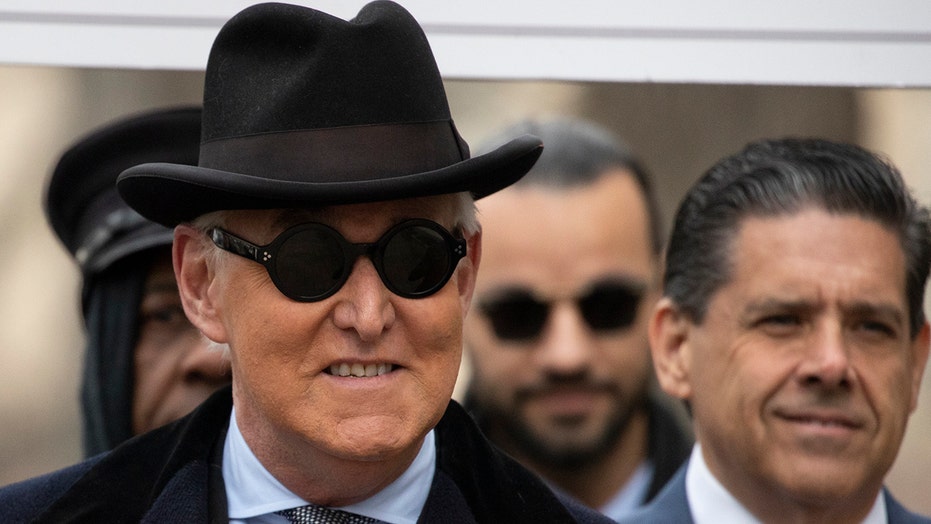 President Trump on Friday said he was “looking at” a pardon for longtime GOP operative Roger Stone who is slated to report to prison for more than three years on Monday, saying he was treated “unfairly.”

The president, departing the White House, was asked whether he would pardon Stone.

“I’ll be looking at it,” Trump said. “I think Roger Stone was very unfairly treated, as for many people.”

He added: “And in the meantime, [former FBI director James] Comey and all these guys are walking around, including Biden and Obama, because we caught them spying on my campaign. Who would have believed that?”

The president has signaled he could be open to granting Stone clemency — saying in a tweet last month that Stone was “a victim of a corrupt and illegal Witch Hunt, one which will go down as the greatest political crime in history. He can sleep well at night!”

Stone is set to report to prison on July 14. He was sentenced in February to more than three years in prison after being convicted in November 2019 on seven counts of obstruction, witness tampering and making false statements to Congress on charges that stemmed from former special counsel Robert Mueller’s investigation. Stone, however, has appealed his conviction and continues to deny any wrongdoing.

During an exclusive interview with Fox News this week, Stone said he was “praying” for Trump to intervene.

When asked whether he’d prefer a pardon, or a commutation of his sentence, Stone said “either one obviously would have an effect, in my opinion, of saving my life.”

A presidential pardon completely absolves an individual of the crime he or she is found to have committed. A commutation lessens the punishment or eliminates jail time, but leaves the conviction standing.

“I have deep concerns about going to a prison where there absolutely is COVID virus, and, therefore, either one would have an effect of saving my life,” Stone said.

He added: “If I should be fortunate enough to get a commutation, I would continue to fight for vindication.

“I think I’ll be the last person to know,” Stone told Fox News. “He hates leaks, and he hates to be told what to do. I have instructed my lawyers not to contact the lawyers at the White House.”

Stone told Fox News he has not yet received any formal communication from the White House on a potential presidential pardon or commutation of his sentence, which is set to begin Monday and last for 40 months.

“I certainly think it could happen,” Stone said. “I’m not going to second-guess the president.”