Churches Are a Major Source of Coronavirus Cases 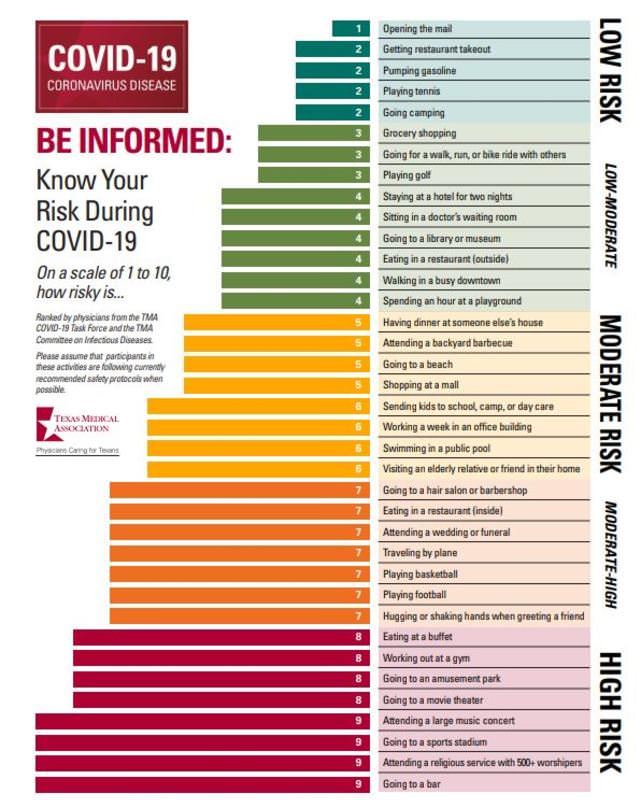 Going to a bar or attending a church with more than 500 people poses a much higher risk of contracting coronavirus than opening the mail or getting takeout, according to a list of activities ranked by Texas doctors.

The Texas Medical Association, which is made up of 53,000 physicians and medical students across the state, released the list that ranks how risky an activity is regarding COVID-19 on a scale of one to 10.

According to the list, going to a bar, attending a religious service with 500 plus people or going to a large music concert or sports event are the most high risk activities for exposure to coronavirus.

Visiting a movie theater, amusement park, a gym or eating at a buffet follow closely behind.

Hugging or shaking hands with a friend falls into the moderate-high risk category.

Also in that category is traveling on a plane, going to a wedding or funeral, visiting a hair salon or barber and eating inside a restaurant.

At the other end of the scale, opening the mail, getting takeout and pumping gas are considered low risk.

Grocery shopping, sitting in a doctor’s waiting room, eating at an outdoor restaurant and spending an hour at a playground would be a low-moderate risk, according to the list.

The medical professionals who compiled the list ranked each activity based on the ability to social distance.

‘The levels are based on input from the physician members of the task force and the committee, who worked from the assumption that – no matter the activity – participants were taking as many safety precautions as they can,’ the TMA said.

It comes as the United States set a grim record on Tuesday with more than 60,000 new coronavirus cases reported in a single day, up from the previous record of 53,600 infections set last Thursday.

The number of cases across the US is now nearing 3 million and more than 131,000 Americans have died from COVID-19 since the pandemic took hold in March.

At least 1,100 of those deaths were recorded on Tuesday, which is the highest daily increase this month.