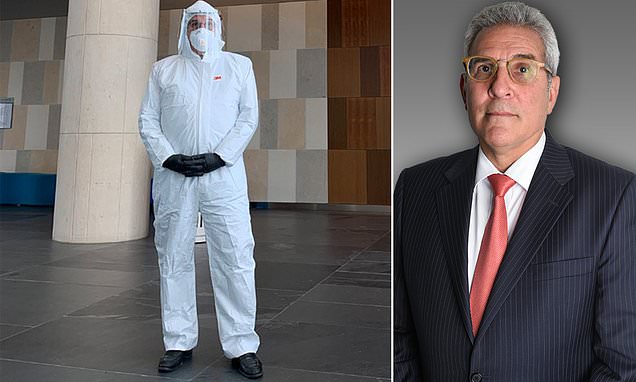 A Florida lawyer has attended court in a hazmat suit as coronavirus cases in the state continue to soar.

Rabin teamed the white 3M-made suit with rubber gloves, a respirator mask and a face shield so as not to contract COVID-19.

The eye-catching ensemble attracted the attention of local police officers, who stopped the lawyer and sarcastically asked: ‘Is there something we should be worrying about?’

In Florida cases of coronavirus have doubled in the past two weeks alone.

As of Tuesday morning, more than 206,000 Floridians have tested positive to COVID-19, and upwards of 3,700 have died for the disease.

Miami-Dade County has been hit particularly hard, with almost a quarter of Florida’s cases coming from the area.

‘I don’t blame you, man!’ one of the workers reportedly yelled at Rabin as he made his way into the courtroom.

Even the judge presiding over the sentencing of Rabin’s client did not reprimand him for the unorthodox courtroom couture.

‘She understood, quite frankly, and wasn’t upset about it in any way,’ Rabin told Law.com.

Another attorney posted to Twitter after seeing a snap of Rabin in the suit, and humorously wrote: ‘It would have been a nice touch if he had worn a tie on the outside of the hazmat suit’.

While Rabin could have dialed into the sentencing hearing via Zoom, he said he wanted to be in court to comfort his client – despite the risk of becoming infected with the virus.

‘A sentencing is the most important stage of a person’s life that’s facing a criminal case, and I just think a lawyer has an ethical obligation to be standing there with them,’ he told Law.com.

Florida is among 40 states across the US that are seeing an alarming increase in coronavirus cases. More than 2.9 million Americans have tested positive to the virus, and 130,000 have died.