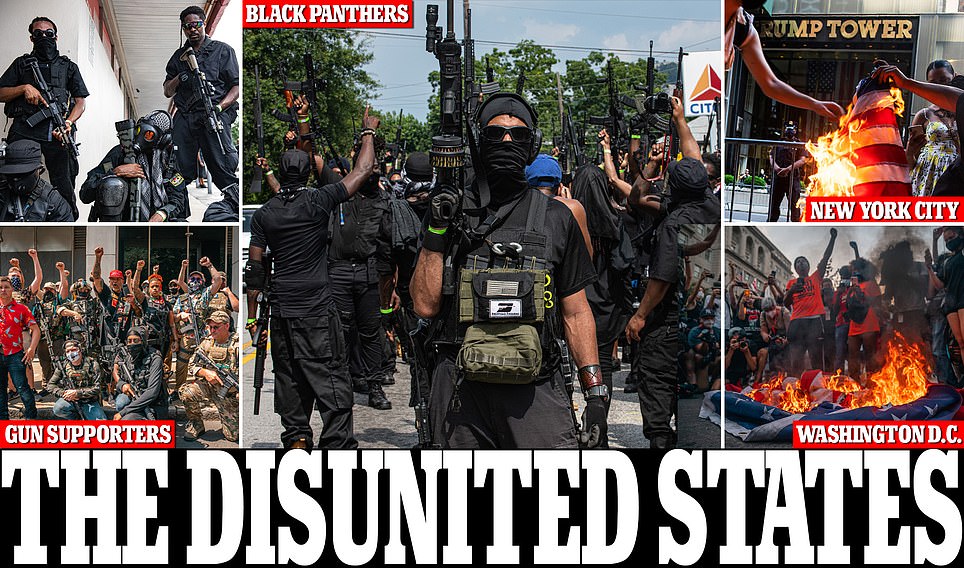 More than a hundred heavily armed Black Panthers descended on the country’s largest Confederate monument to demand its removal, while demonstrators burned American flags near Trump Tower as tens of thousands across the country attended Fourth of July protests.

On Saturday, as Donald Trump hosted hundreds at the White House for a July Fourth fireworks display, thousands of Americans ditched their traditional cookouts and celebrations for rallies and sit-ins, including a march in Washington DC in the searing 90-degree heat near the National Mall.

Flag burnings were also seen in Washington, as well as in New York City outside the Trump Tower, and on Trump’s Hollywood Walk of Fame star.

And at the nation’s biggest Confederate monument, which has been used as a meeting place by the KKK, the Black Panthers gathered to demand the removal of the racist sculpture.

In Georgia, as many as 100 reported members of the Black Panther Party descended into Stone Mountain Park as calls to remove the Stone Mountain Confederate Memorial boomed.

Stone Mountain Confederate Memorial, a nine-story-high base-relief sculpture carved into a sprawling rock face northeast of Atlanta, is perhaps the South’s most audacious monument to its pro-slavery legacy still intact.

Despite long-standing demands for the removal of what many consider a shrine to racism, the giant depiction of three Confederate heroes on horseback still towers ominously over the Georgia countryside, protected by state law.

It, as well as many other Confederate statues, have become a debate between Americans who argue they celebrate hate ideologies and those who believe it honors the traditions of the South.

The political group was initially founded to monitor the behavior of Oakland Police Department officers, who were accused of police brutality, with armed civilian patrols called ‘copwatching.’

More than 50 years later, the current protests over police brutality have picked up where the founders left off after the death of George Floyd and several other Black Americans by law enforcement.

‘Here we are in Atlanta, the birthplace of the Civil Rights Movement and still we have the largest Confederate monument in the world,’ said Gerald Griggs, a vice president of the Atlanta chapter of the NAACP civil rights group, which staged a march last week calling for the carving to be scraped from the mountainside.

‘It’s time for our state to get on the right side of history.’

Stone Mountain has long held symbolism for white supremacists. The Ku Klux Klan, a hate group that was formed by Confederate Army veterans and has a history of lynchings and terror against Black people, held its rebirth ceremony atop mountain in 1915 with flaming crosses.

Longer than a 100-yard American football field, it features the likenesses of Jefferson Davis, the president of the 11-state Confederacy, and two of its legendary military leaders, Robert E. Lee and Thomas ‘Stonewall’ Jackson, notched in a relief 400 feet above ground.