WATCH: Talented 20-Year-Old Filmmaker Uses VFX to Transform Himself Into Spider-Man, a Jedi, and Ben-10 and Earns Praise from Disney’s Bob Iger, Mark Hamill, Josh Gad, and Other Celebrities

A 20-year-old college theater major is going viral for an incredible video in which he transforms into his favorite superheroes — all with some very impressive special effects.

Julian Bass, who will be a junior this fall at Georgia State University, uploaded the video to his Twitter and TikTok accounts on July 2 — and in just a day, he has already racked up about 13 million views and praise from the likes of Josh Gad, Mark Hamill, and former Disney CEO and current Executive Chairman Bob Iger.

Using some VFX talent, costumes, and props, the suburban Atlanta native performs as a Jedi, Ben 10, and Spider-Man, and the very entertaining clip may have landed him a job.

if y’all can retweet this enough times that Disney calls, that’d be greatly appreciated pic.twitter.com/GrKlIRxg3J

The video, set to the Harry Styles song Watermelon Sugar, starts with Julian dressed in a stylish outfit in his living room.

He soon turns into a Jedi, whipping a lightsaber from behind his back.

Showing off his fighting skills, he eventually cuts right through the screen — as the VFX show — and as the shot parts, he returns as Cartoon Network’s Ben 10.

Then, with a backflip, he transforms once again into Spider-Man, looking like a dead ringer for Miles Morales.

Julian shared the video on TikTok and Twitter, writing in the tweet: ‘If y’all can retweet this enough times that Disney calls, that’d be greatly appreciated.’

On the two platforms, the clip has quickly earned millions of combined views and caught the attention of some industry heavyweights.

‘Give this man his own everything now,’ wrote Josh Gad.

Julian is in awe of the replies.

‘I jokingly asked for Disney and got the chairman himself,’ he told The Hollywood Reporter. ‘I absolutely had no idea it’d get this big. I mean, I’ve always put 100 per cent into the videos I make and they’re usually well received by those around me but nothing of this caliber. 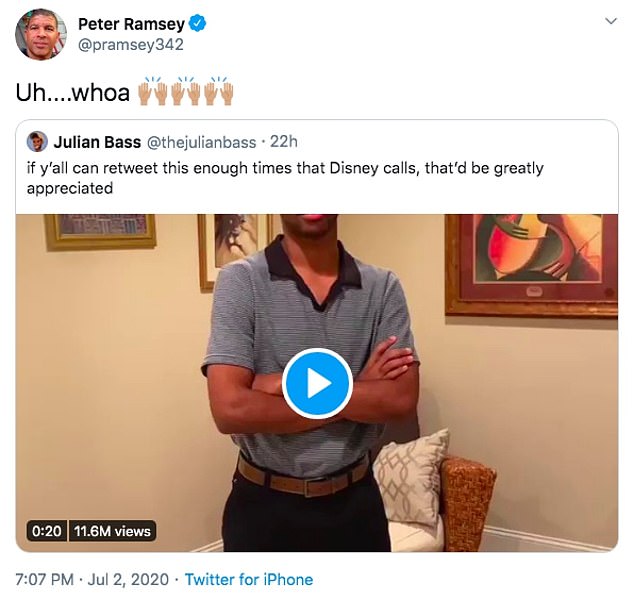 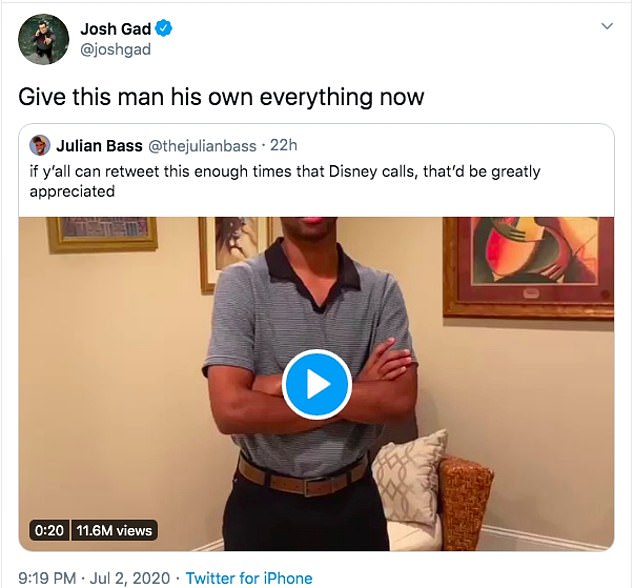 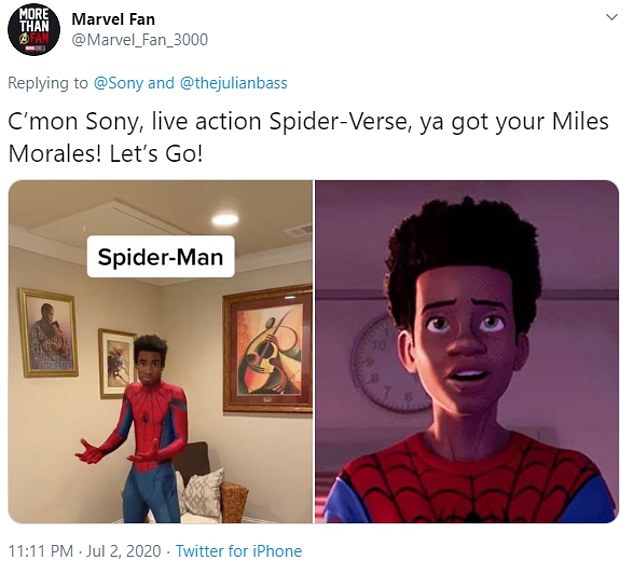 ‘I mean, these are people who have always been on my radar and it means everything in the world to me that now they’ve inspired me to a point where I’m on theirs. And as for Bob Iger, [it’s the] icing on the cake!!’

As for whether or not he’ll be working with Disney soon, he said: ‘There’s most definitely going to be some discussions about what can be done going forward.’

Before this video went viral, Julian has won awards at local film festivals, with one video taking home a National PTA Reflections award.

However, he said that most of his filmmaking skills were learned so that he could perform, which is his real focus.

‘As a kid, I couldn’t sit and wait to grow up or wait to have a friend make it for me. I felt like the only accurate way to portray what I was dreaming up was to actually do it myself.’