Book Review: ‘The Myth of the American Dream: Reflections on Affluence, Autonomy, Safety, and Power’ by D. L. Mayfield 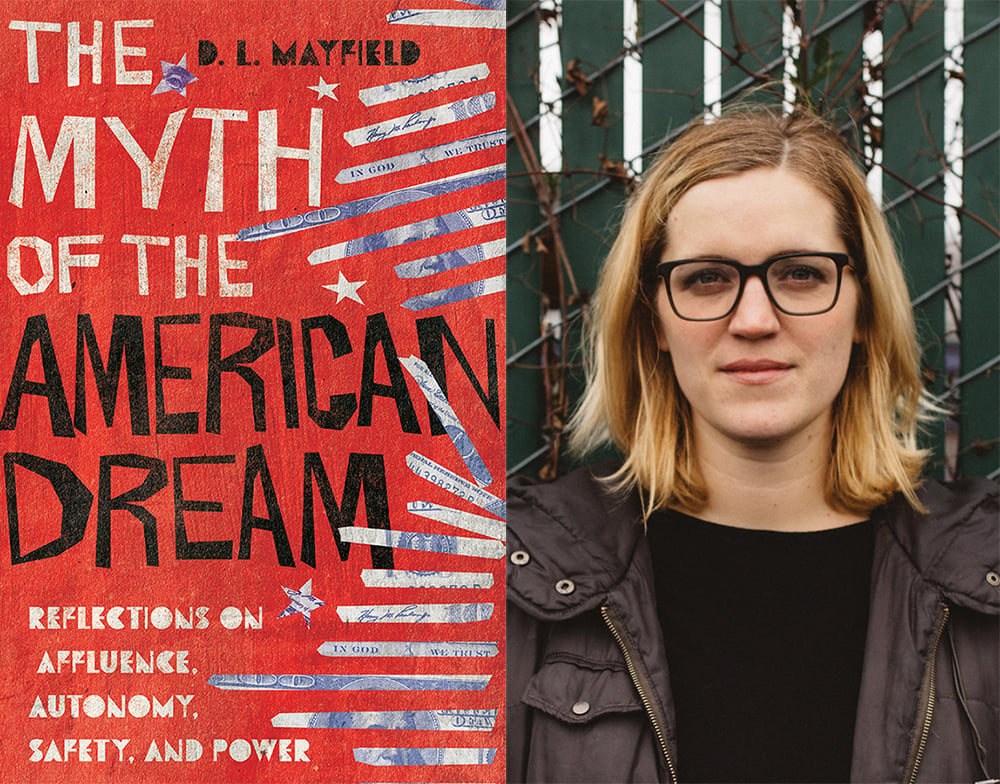 Review by Abigail Murrish, who lives in Norwood, Ohio, where she works for her church and curates the newsletter “Given Appetites.” You can subscribe to her newsletter and find her online at abigailmurrish.com.

As D. L. Mayfield understands it, the American Dream offers a simple formula: “Anyone can make something of themselves if only they try hard enough.”

In one sense, I can’t argue with this formula because it’s been the story of my life. I’ve worked hard, and to a large degree I’ve built the life I want. Yet in another sense, I know it’s fanciful to believe I’m a purely self-made woman. My skin color, my family, my place of birth, my education, and my personal connections are just a few of the advantages I’ve enjoyed.

In her latest book, The Myth of the American Dream: Reflections on Affluence, Autonomy, Safety, and Power, Mayfield calls upon Christians to reject the “work hard and achieve your dreams” formula as both false and dangerous. For some, she argues, trusting in the American Dream is a recipe for disappointment. (After all, plenty of hard-working people see their ambitions thwarted by misfortune, injustice, or structural barriers.) For others, the ones who do seem to succeed, the greater danger is self-satisfied complacency. Overlooking their privileges, they fail to ask why others can’t follow the same path.

To expose the insufficiency of the American Dream, Mayfield measures it against the prophecy found in Isaiah 61, the passage Jesus used to inaugurate his public ministry in Luke 4:

The Spirit of the Lord is on me, because he has anointed me to proclaim good news to the poor. He has sent me to proclaim freedom for the prisoners and recovery of sight for the blind, to set the oppressed free, to proclaim the year of the Lord ’s favor. (Luke 4:18–19)

Instead of orienting our lives around the false ideals of affluence, autonomy, safety, and power, Mayfield argues that God’s people in America are called to something different and better—to the Bible’s vision of the good life, as reflected in the person and work of Jesus.

The call of Mayfield’s book is clear: to pay attention—to one’s own life, the history and current landscape of the United States, and the story of white evangelicalism within it.

Mayfield—a writer and activist living in Portland, Oregon—has certainly paid attention, and it serves her readers well. Although her writing is strong and intense, she doesn’t create a spectacle. It ’s clear she ’s done the emotional work of processing her experiences growing up within white evangelicalism. This allows her to see certain flaws and blind spots that others might neglect.

Mayfield’s doubts about the American Dream are not, first and foremost, a function of her political beliefs. They arise, instead, from thoughtful observation of the lives of her neighbors. Much of her adult life has been spent working with and living alongside refugee groups, often in the capacity of teaching English classes. Seeing the struggles those refugees endure while trying to gain an economic and cultural foothold in the United States has moved her to fresh consideration of why the American Dream seems so cruelly unattainable to those on the lower rungs of society.

As Mayfield sees it, the ideals of the American Dream—the appeal of affluence, autonomy, safety, and power—are more a pagan than a Christian inheritance. Pushing back on the idea of American as a Christian nation, she instead argues that the United States bears a close resemblance to those nations in the Bible that oppressed God’s people. “It is important,” she writes, “for those of us who are embedded in the dominant culture of the United States to take the time to meditate on the ways of Pharaoh, who ruled off of predatory economic practices and was never satisfied. The Bible shows us example after example of empire and how it works in the world: places like Egypt, Assyria, Babylon, and Rome.”

These observations reminded me of my experience studying the book of Exodus a few years ago. Reflecting on Pharaoh’s use of Israelite slave labor to build his kingdom, I was spurred to consider the unseen, oppressive forces (both current and historic) that allow me to live with ease and comfort, enjoying access to good food, stylish clothing, and a mortgage for a home in a place of my choosing. Mayfield pushes readers to make these kinds of connections, identifying parts of ourselves that are more like Pharaoh than Moses.

Within American evangelical culture, one of the most influential exponents of the American Dream is Dave Ramsey, the popular personal-finance guru and radio host. Without identifying him by name (though it is plain enough who she is talking about), Mayfield writes perceptively about Ramsey and his money-management philosophy, which forthrightly holds out the pursuit of millionaire status as a good and honorable goal. She praises his rants against debt, his encouragement of frugality, and his warnings against chasing after a consumeristic culture in our spending habits. But she also beautifully captures the tension involved in marketing all this as distinctively “Christian” wisdom, especially when structural barriers in place prevent many Americans from putting it into practice.