Byron Bernstein, a prominent Twitch streamer and beloved member of the online gaming community, has reportedly died by suicide on Thursday at age 31.

Bernstein, better known by the name ‘Reckful,’ was known as one of the best World of Warcraft players across the globe and amassed a massive following on Twitch with more than 936,000 followers.

Bernstein’s former girlfriend, known as ‘Blue,’ confirmed his death with a number of heartbreaking tweets.

Thousands of World of Warcraft players across the several countries and servers reportedly logged onto the popular site and gathered inside a virtual cathedral to pay tribute to Bernstein.

Dot ESports reported that grieving fans were mourning Bernstein’s death and describing the positive impact he’s had on them.

‘Bryon had a brilliant mind, I loved watching streams where he would do chance/odd calculations and show his work,’ one players said. ‘It was so interesting and fun.’

‘I always wished I ran into him walking around Austin. RIP Reckful,’ another user wrote.

The players knelt inside the Cathedral of Stormwind to show just how much Bernstein meant to the expansive World of Warcraft community.

In 2011, Bernstein released a gaming movie called ‘Reckful 3’ that gained one million views within the first week.

He later shifted his career into game developing, creating the game ‘Everland’ in May 2020 with hopes of helping people ‘find friendship and a sense of community.’

Bernstein has also been open about his struggles with depression throughout his life.

In January, Bernstein shared in a video that he lost his brother to suicide when he was six-years-old and has dealt with mental health issues.

He told viewers that he was working to get better and developing his new game gave him ‘a sense of purpose.’

‘I am actually day-to-day happy,’ Bernstein said at the time. ‘I’ve never felt this way in my life. I’m not saying it’s gonna last forever, but right now I’m happy.’

His Twitter feed on Thursday contained concerning tweets that worried his fans.

‘I feel bad for anyone who has to deal with my insanity,’ he wrote Thursday morning.

Blue first confirmed Bernstein’s death Thursday morning before cautioning others to be mindful of their words and actions.

‘Thank you to everyone who has reached out. I wish he could see how much he is loved and all of the sweet things people have said to honor his memory. Remember, your words/tweets affect people, even the famous people. Please be kind,’ she wrote.

Several fans and fellow gamers also took to Twitter to remember Bernstein, who some described as ‘the face of Twitch for many years.’ 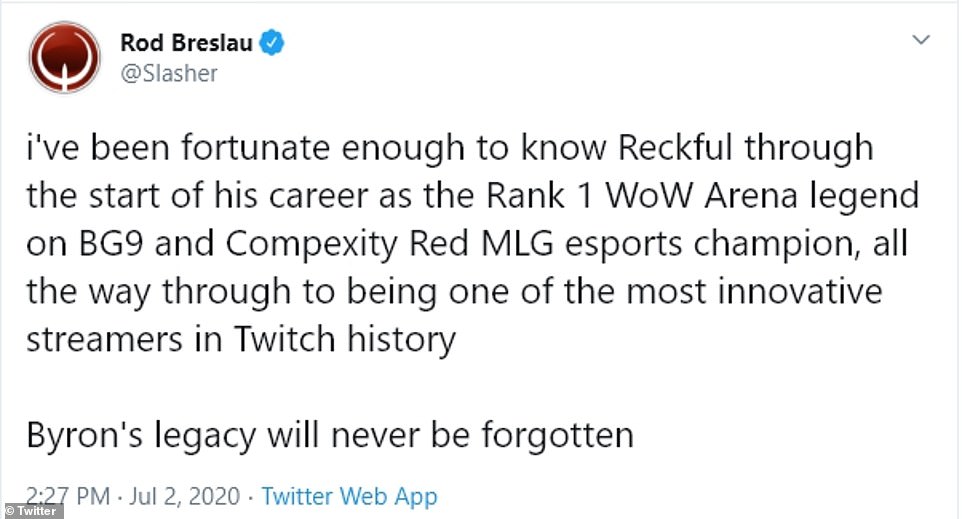 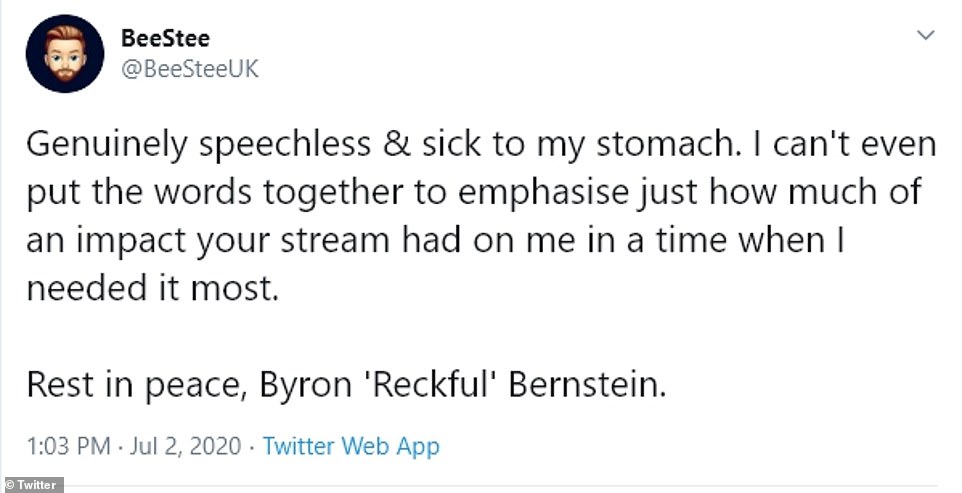 ‘Byron u deserved better. Life is not fair. You were at times the best person to spend time with, u deserved…so much better than this,’ wrote Morrris.

‘U were and always will be a legend in my life so in that way you’ll never die. RIP.’

Andy Milonakis, a Twitch user who sometimes appeared in Bernstein’s videos, said: ‘Heartbroken. Still in shock, I’ve dreaded that this day could possibly come. RIP Byron, I love you.’

One fan admitted he was ‘Genuinely speechless & sick to my stomach,’ over the news of Bernstein’s death.

‘I can’t even put the words together to emphasise just how much of an impact your stream had on me in a time when I needed it most. Rest in peace, Byron ‘Reckful’ Bernstein,’ he wrote.

‘I’ve been fortunate enough to know Reckful through the start of his career as the Rank 1 WoW Arena legend on BG9 and Compexity Red MLG esports champion, all the way through to being one of the most innovative streamers in Twitch history Byron’s legacy will never be forgotten,’ wrote Breslau.