England’s North-South Covid-19 divide: Only EIGHT of the country’s 50 worst-hit authorities are in the south, official data reveals 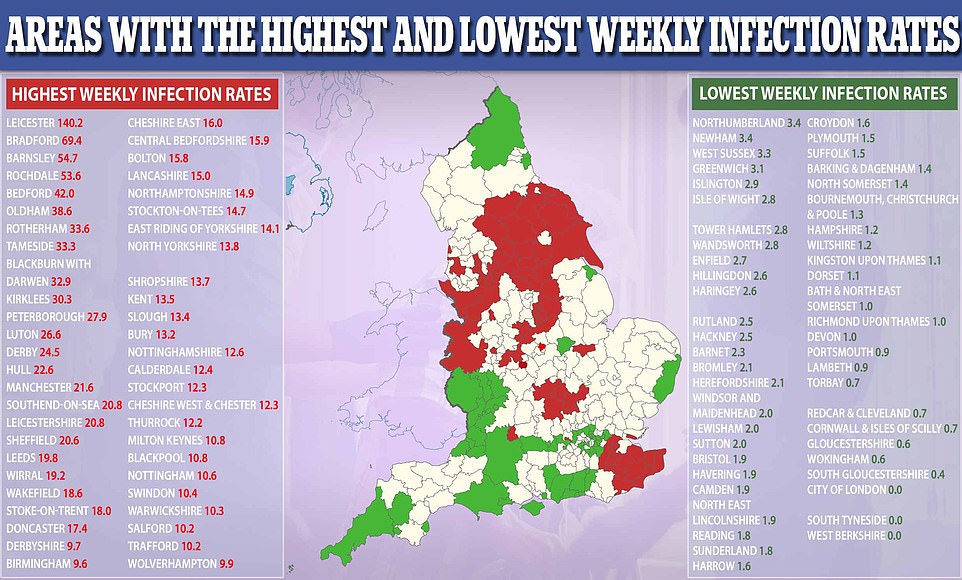 Only eight of England’s 50 areas worst-hit by coronavirus are in the South, according to official data that lays bare the country’s North-South divide amid the growing threat of more ‘local lockdowns’.

Leicester — the first city in UK to be struck by further Covid-controlling measures — has the worst infection rate in the country, with 140.2 cases confirmed between June 15-21 for every 100,000 people. It is followed by a cluster in the North West of England, with Bradford, Barnsley and Rochdale all recording at least 50 coronavirus infections for every 100,000 people in the same seven-day spell.

Analysis of the Public Health England data shows they aren’t the only places in the North to be rocked by flare-ups of the disease, which has claimed at least 55,000 lives across the whole of the UK.

In comparison, just six authorities at the bottom of the table are in the North or the Midlands — South Tyneside (0), Redcar and Cleveland (0.7), Sunderland (1.8), North East Lincolnshire (1.9), Rutland (2.5) and Northumberland.

One of the main causes of the ‘North-South’ divide in coronavirus cases in England is down to the disparity in job roles, experts believe — pointing to figures showing London is recovering quicker than most regions.

Scientists say infections may have dropped at a faster rate in the capital because there are more white collar jobs there, therefore more employees were able to work from home and isolate from others. In deprived areas people are more likely to have to go to work and use public transport — raising their risk of being infected.

Government sources say Leicester-style shutdowns could be ‘just days away’ for other places ahead of the biggest step back to normal life with Brits set to flock to the pubs to celebrate ‘Super Saturday’.