Wow – are we going too far? Sir Michael Palin backs calls to redesign Queen’s ‘racist’ knighthood honour showing St Michael crushing the devil – because it ‘looks like George Floyd’s murder’ as Jamaica’s governor refuses to wear it and 16,000 sign petition 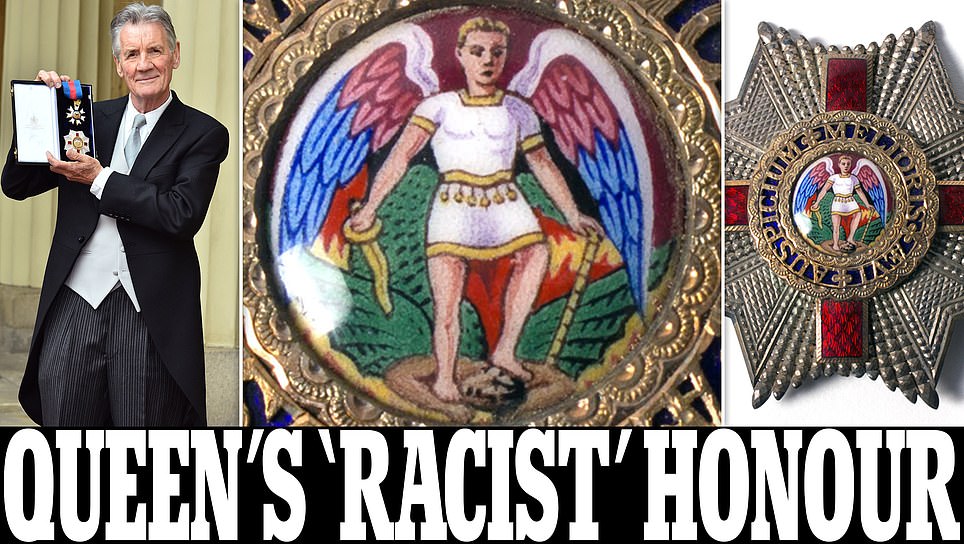 Monty Python star Sir Michael Palin has joined calls to redesign one of the Queen’s honours, which he received last year, after a petition was launched claiming its insignia is ‘racist’ and ‘looks similar to George Floyd’s killing’.

The insignia for the Most Distinguished Order of St Michael and St George – one of the Queen’s highest honours – previously featured a picture of a white angel standing on the neck of a black man.

The image, which was changed in 2011 to feature a light-skinned devil, is actually a depiction of the Archangel Michael defeating Satan.

But a petition claims it bears a resemblance to the death of George Floyd, who died in May after a Minneapolis police officer knelt on his neck for almost eight minutes as he was being arrested.

Sir Michael, who was appointed a Knight Commander of the Order of St George and St Michael in 2019 for services to travel, culture and geography, has now backed calls to change the design.

The Governor General of Jamaica, Sir Patrick Allen, who received the award in 2009 and has the old design, has said he will no longer wear the insignia, reports the Telegraph.

The Cabinet Office says the premise of the petition is ‘inaccurate’ as the picture was redesigned nine years ago and now features a light-skinned devil.

And although Sir Michael said his insignia features the updated drawing, the comedian and television presenter has backed calls for a redesign after seeing other examples.

He told the Telegraph: ‘Though the image on my award is of a white Satan being vanquished, I think that depicted is inappropriate and offensive and I would back the Governor-General of Jamaica’s call for it to be re-designed.’

On the decision to not wear the honour, a spokesperson for the Governor-General of Jamaica told the Telegraph: ‘This follows concerns raised by citizens over the image on the medal, and the growing global rejection of the use of objects that normalise the continued degradation of people of colour.’

Sir Patrick received the award in 2009, meaning his honour would feature the old design.

The Order of St Michael and St George is awarded by the Queen to ambassadors and diplomats for distinguished service.

An image on the badge shows St Michael trampling on a prostrate Satan, but campaigners say it looks like the recent killing of Mr Floyd.

An online petition calling for the redesign of the badge on the honour – founded in 1818 after the Napoleonic wars – has attracted more than 16,000 signatures.

The change.org petition, started by Tracy Reeve, says: ‘This is a highly offensive image. It is also reminiscent of the recent killing of George Floyd by the white policeman in the same manner presented here in this medal.’

Bumi Thomas, a British-Nigerian activist, told The Guardian that the image on the badge was of ‘a black man in chains with a white, blue-eyed figure standing on his neck’.

She added: ‘It is literally what happened to George Floyd and what has been happening to black people for centuries under the guise of diplomatic missions – active, subliminal messaging that reinforces the conquest, subjugation and dehumanisation of people of colour.’