The Vatican’s Attempt to Reform Finances Amid Pandemic May Not Work, Despite Pope Francis’ Best Hopes

VATICAN CITY (RNS) — Six months into 2020, nations around the world are already floundering to salvage their crippled economies.

The Vatican is no exception.

Travel bans and lockdown in Italy have shut down the usual robust tourist trade. The Vatican’s world-renowned museums, which usually draw tens of thousands of people a day and generate millions of dollars in revenue, remain mostly empty.

The financial blow dealt by the pandemic has put a dent in charitable donations.

All told, revenue at the Vatican will likely be down between 25% and 45% this year, according to the Rev. Juan Antonio Guerrero Alves, head of the prefect of the Secretariat for the Economy.

All of which adds pressure to Pope Francis’ attempts to reform the Vatican’s finances.

In June, the pope released new guidelines to streamline how the Vatican and its bureaucratic departments spend their now reduced finances for goods and services.

The document sets clear procedures for Vatican departments to follow when it comes to expenditures. 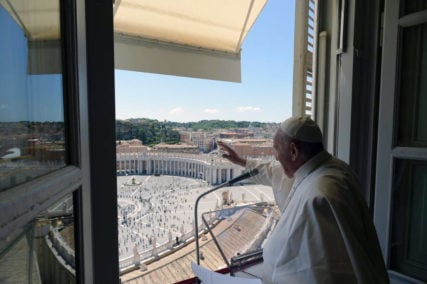 Pope Francis delivers his blessing from his window at
the end of the Regina Coeli noon prayer, in St. Peter’s
Square, at the Vatican, Sunday, May 24, 2020. For the
first time in months, well-spaced faithful gathered in
St. Peter’s Square for the traditional Sunday papal
blessing. The square was closed due to coronavirus
lockdown measures. Photo by Vatican Media

The keyword in the documents is “centralization,” said Vincenzo Bassi, vice president of the Catholic jurist union in Italy, during an interview Monday (June 29) with Religion News Service.

With the new measures, the Governorate and the Administration of the Patrimony of the Holy See, or APSA, must approve any purchase of goods or services at the Vatican through a carefully selected list of vendors.

If a Vatican department wishes to acquire goods and services, it must send a proposal to APSA or the Governorate for approval. Only if approved can other departments go ahead with the deal, which must follow transparency and sustainability standards.

“The general rule is to centralize the purchase of goods and services,” Bassi said.

He added that the document does allow Vatican departments to exercise their autonomy if they follow the rules.

The document issued by Pope Francis is designed to “guide a process of economic efficiency and sustainability,” Bassi said.

But the guidelines won’t work if Vatican officials and employees don’t embrace them.

“A law doesn’t enforce justice,” Bassi said. “It’s up to the will of the people. In this case, we are referring to the functionaries of the Holy See, who will have to put it in practice according to the criteria of justice.”