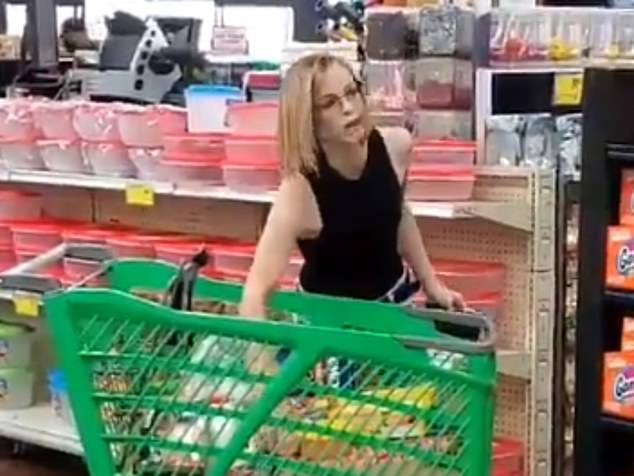 A woman shopping at a Dallas grocery store exploded in rage and proceeded to throw items from her cart while yelling expletives after being asked to wear a face mask.

The profanity-laced meltdown took place at the Fiesta supermarket on West Illinois Avenue on Saturday and was captured on video, which has since gone viral on social media.

The woman, a bespectacled blonde wearing a black top and skinny jeans, is seen hurling containers of raw chicken, pork chops, other meat products and groceries while unleashing profanities.

‘I don’t give a f*** about Dallas and dumba** motherf***ing rules,’ the woman rants as she continues lobbing food items.

With the words, ‘I don’t give a f***, I got a f***ing mask,’ the angry shopper storms off, waving her face covering in her hand.

‘Now clean that s*** up,’ she yells out as she exits the store, referring to the mess she had left on the floor.

Witness Omar Guillen told WFAA: ‘I had noticed the woman during my time at the store. She was wearing her mask but by the time she was in line she had taken it off.’