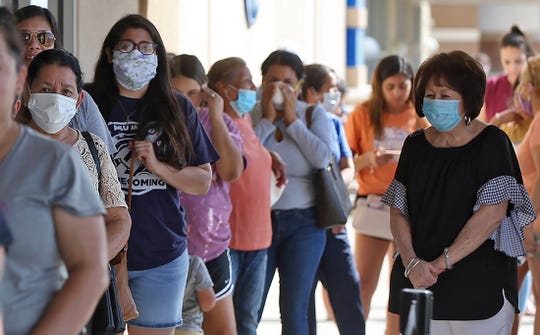 With less than five months until the 2020 elections, Americans are deeply unhappy with the state of the nation. As the United States simultaneously struggles with a pandemic, an economic recession and protests about police violence and racial justice, the share of the public saying they are satisfied with the way things are going in the country has plummeted from 31% in April, during the early weeks of the coronavirus outbreak, to just 12% today.

However, nearly half of adults (46%) say they feel hopeful about the state of the country, although a 53% majority says they are not hopeful.

In the presidential contest, Donald Trump faces a 10 percentage point deficit in his race against Joe Biden: 54% of registered voters say if the election were held today, they would support Biden or lean toward voting for him, while 44% support Trump or lean toward supporting him.

As has been the case throughout his presidency, and even during his successful campaign for the White House four years ago, Trump continues to engender strong loyalty – and intense opposition. About three-quarters of registered voters who support Trump (76%) say they view their presidential ballot primarily as a vote for the president. By comparison, only 33% of Biden voters view their vote more as an expression of support for him; about twice as many (67%) view it as vote against Trump.

The new national survey by Pew Research Center, conducted June 16-22 among 4,708 adults, including 3,577 registered voters, finds sharp differences in how voters evaluate Trump’s presidency compared with Biden’s presidency, if he is elected. Very few voters – just 9% – say Trump is an average president; 37% say he is a good or great president; and a much larger share (53%) say he is poor or terrible, including 42% who think he is a terrible president.

When it comes to voters’ views of the candidates’ personal traits and characteristics, Trump and Biden are a study in contrasts. Across six personal traits, Trump draws his lowest rating for being even-tempered. Just 25% of voters say “even-tempered” describes Trump very or fairly well; nearly three times as many (74%) say this phrase describes him not too well or not at all well. Even among voters who support Trump in the fall election, just 53% describe him as even-tempered.

Biden gets his most positive rating for his temperament: 60% of registered voters describe him as even-tempered, more than twice the share who describe Trump this way. Moreover, a 54% majority describes Biden as caring about the needs of ordinary people; only 41% say this phrase describes Trump very or somewhat well. And more voters say Biden is a good role model and describe him as honest than say that about Trump, by 15 percentage points and 12 points, respectively.

Yet Biden has a notable weakness. Just 40% of voters describe him as energetic – his lowest rating among the six traits included on the survey. This is Trump’s most positive attribute in the eyes of voters, with a 56% majority describing him as energetic. There is only one trait of the six on which voters have similar views of the candidates; 46% say Trump is courageous while 45% describe Biden this way, although more say this description applies to Trump verywell (28% vs. 15% for Biden).