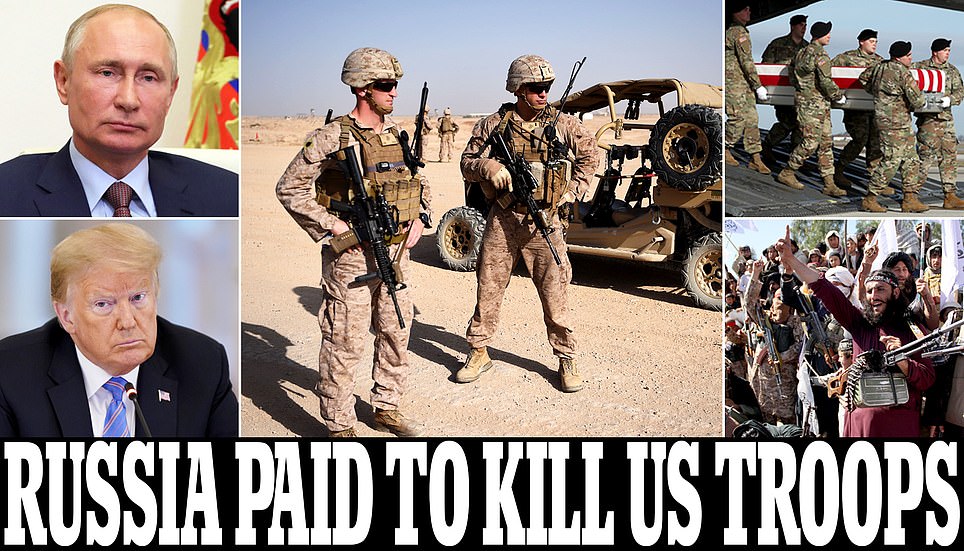 In another brazen attack on the U.S., a Russian military intelligence unit has secretly paid bounties to Taliban-linked fighters to kill U.S. and coalition forces in Afghanistan, according to a bombshell New York Times report.

The report represents a deadly escalation in Moscow’s repeated efforts to undermine U.S. policy, and came as the administration was seeking to find ways to extract itself from the decades-long war by making peace with the Taliban.

President Donald Trump was briefed on the activity months ago, the New York Times reported Friday, citing officials with knowledge on the matter – but the U.S. took no evident action.

U.S. Intel believed the operation to have been initiated by the notoriously violent Unit 29155 of the G.R.U, an arm of Russia’s military intelligence agency.

In recent years, the unit has been linked to assassination attempts or revenge plots aimed at destabilizing the West.

Yet it would be the first time that it was known to have initiated attacks on Western troops, a major escalation of force against the U.S.

There were times when the bounties were in fact paid, according to the paper, although it did not identify specific U.S. troops stationed in Afghanistan were killed as a result of the Russian bounty payments.

According to the paper, the money went to Islamist militants.

Twenty Americans were killed last year in the bloody Afghan war, which began in 2001, but it was not clear if any of these deaths were under suspicion.

The matter was discussed at the White House national security council as early as March.

According to the paper, U.S. policy members developed a ‘menu’ of options, from a diplomatic slap to further increases in U.S. sanctions or other unnamed responses.

But officials said the White House has taken no response to date and no explanation for the delay was given.

The bounties allegedly came as peace talks to end the long-running war in Afghanistan were ongoing and information was kept a closely guarded secret until the administration began expanding briefings this week.

They also shared intelligence with the British government whose troops are said to be among those targeted.

The news hit the Trump Administration as it was already grappling with the coronavirus pandemic and as Trump hoped that a peace deal with the Taliban would end the Afghanistan War in the last few months of his re-election campaign.

Russia fiercely denied the allegations on Friday night, accusing the New York Times of fake news and claiming that the story had placed the lives of employees of the Russian embassies in the United States and the United Kingdom at risk.

‘In the absence of reasons to #BlameRussians, @nytimes is there to invent stories,’ the Russian embassy in Washington D.C.. tweeted Friday night, adding that journalists ‘obviously lack information on cooperation between Russia and U.S. on the Afghan peace process, on Syrian, North Korean, Venezuelan, Iranian agendas’.

With the tweet, the embassy shared images of previous tweets and stories they said backed up the co-operation.

‘Baseless and anonymous accusations of Moscow as mastermind behind killing of U.S. soldiers in Afghanistan have already led to direct threats to the life of employees of the Russian Embassies in Washington D.C. and London,’ they added in a second tweet.

‘We demand the relevant U.S. authorities take effective measures to ensure the fulfillment of their international obligations under the Vienna Convention on Diplomatic Relations of 1961.’

Earlier Friday, the New York Times had reported that The Kremlin was not yet aware of the accusations.

‘If someone makes them, we’ll respond,’ said Dmitry Peskov, the press secretary for President Vladimir V. Putin of Russia.