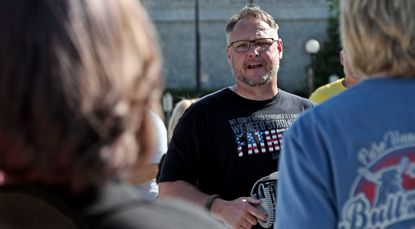 The co-founder of ReOpen Maryland, who organized rallies to pressure Gov. Larry Hogan to lift the state’s stay-at-home order, said he has tested positive for COVID-19.

Tim Walters, a former Republican candidate for the General Assembly, said that he had a dry cough for months but it recently worsened. He said he then began to experience an excruciating headache, a fever and the inability to focus with one of his eyes, which led to vertigo.

Walters, 53, a diabetic who has had mini-strokes, said he went to an emergency room Monday and was diagnosed with the virus.

“Here I am months after not wearing a mask at rallies, churches and so on, and so it’s funny how capricious this thing is,” he said in a Facebook video.

Walters said he doesn’t plan to provide health officials with the people he’s had close contact with for the contact tracing program.