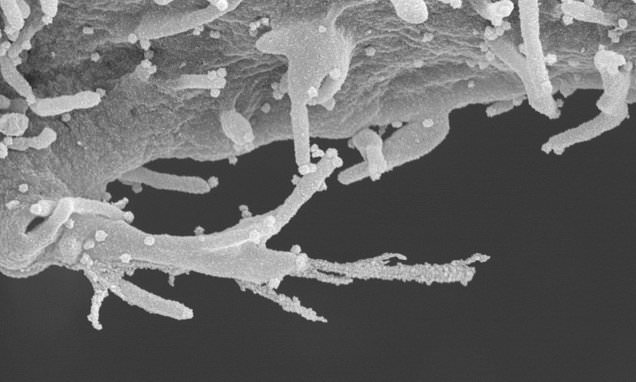 The coronavirus zombifies human cells and causes them to sprout tentacles in order to spread around the body, scientists have discovered.

A study led by the University of California saw researchers take microscopic images of this process, which they have described as ‘so sinister’.

The researchers believe the disease uses the tentacles to ‘surf’ to healthy cells, where it injects its viral venom into them and creates more zombie cells.

Until now, researchers believed Covid infected like most other viruses – by latching onto healthy cells and turning them into copying machines.

But, in people with healthy immune systems, the body can fight off the majority of the virus and prevent it from replicating in high amounts in the body.

The latest discovery appears to show that Covid has, at some point in its evolution, developed a back-up plan to get round the immune system.

The finding has been described as an ‘amazing leap’ in the fight against coronavirus and may open the door to a host of new treatment options.

Nevan Krogan, a professor in cellular and molecular pharmacology at the University of California and lead researcher, told the LA Times: ‘It’s just so sinister that the virus uses other mechanisms to infect other cells before it kills the cell.’

Other viruses — including HIV and vaccinia, a member of the virus family that causes smallpox — also use filopodia as way to spread infection through the body.

But Professor Krogan said the way Covid-19 can grow the tentacles so rapidly is highly unusual.