Trump turns virus conversation into ‘US vs. THEM’ debate 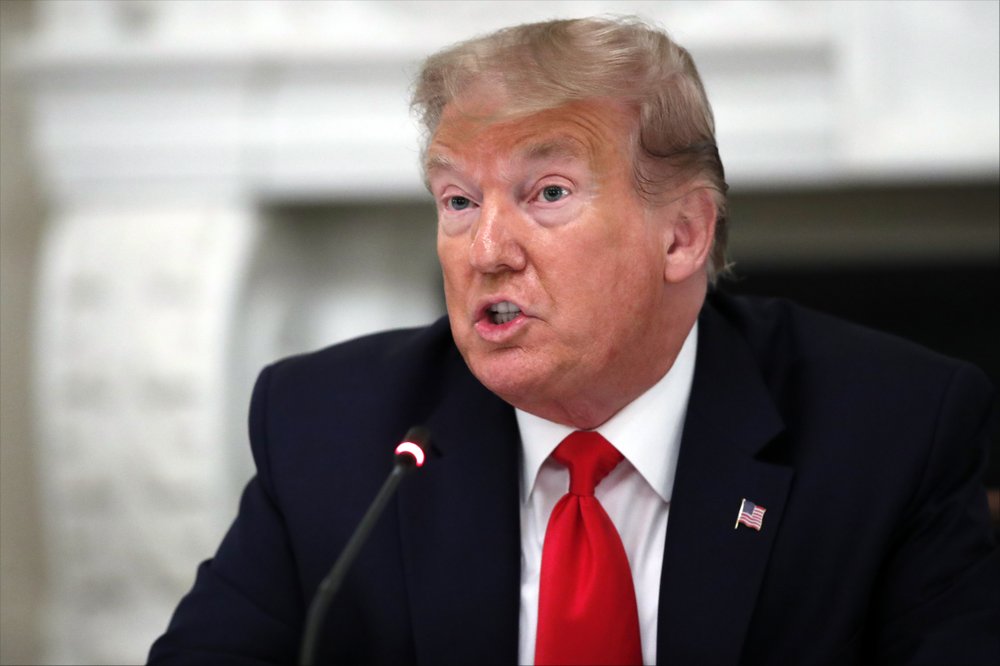 President Donald Trump’s push to resume big rallies despite concern he’s putting the public’s health at risk is part of a broader reelection campaign effort to turn the national debate about the coronavirus into a political fight that he frames as “US vs. THEM.”

“They hate me. They hate you. They hate rallies and it’s all because they hate the idea of MAKING AMERICA GREAT AGAIN!” Trump said in a recent fundraising email.

Those who raise concerns about the health risks of packing in thousands of people for his Saturday rally in Tulsa, Oklahoma, Trump says, are trying to “COVID-SHAME” his supporters for events that will draw fewer people than the throngs that turned out for outdoor protests after the death of George Floyd in Minneapolis.

Trump went so far as to complain in a Wall Street Journal interview this week that some Americans wore facial coverings not as a preventive measure but as a way to signal disapproval of him.

The president appears to be calculating that he can ignite resentment toward “the other” and inspire his base to turn out for him in November, said Christopher Borick, director of the nonpartisan Muhlenberg College Institute of Public Opinion.

“The frame of us-versus-them — the other — has been a consummate rhetorical tool for the president throughout his time in office and before as a candidate,” Borick said. He cited earlier Trump attacks against people living in the country illegally and against “American carnage” in U.S. cities as examples of divisive language from the presidential bully pulpit. “It’s the tried-and-true device that he repeatedly goes back to.”

White House senior adviser Kellyanne Conway on Thursday resurrected a divisive 2016 campaign line — Democrat Hillary Clinton’s dismissive reference to some Trump supporters as a “basket of deplorables” — that underscored the Trump team’s effort to turn mask-wearing into a political issue.

“We can’t pick and choose who can be where, wearing a mask or not, based on our politics, based on whether some people think that folks are irredeemable and deplorable,” she told Fox News. “They have the same rights as anybody else to peacefully assemble … under our Constitution.”

Dan Eberhart, a Republican donor and Trump supporter, said it was disheartening that the virus has turned into a “Red team vs. Blue team” issue. But he said that Trump is clear-eyed that if the economy isn’t “roaring by October,” his reelection hopes are dim. The president’s push to get back to normal, including campaigning, reflects that political reality.

But the reality of the threat from the pandemic is quite different. Epidemiologists are increasingly concerned about spikes in infections that suggest the virus is still spreading.

Arizona, Florida, California, Oklahoma, South Carolina and Texas all reported record-high single-day increases in coronavirus cases on Thursday. Tulsa County, where Trump will hold his rally at a 19,000-seat arena, has emerged as the state’s leading COVID-19 hot spot. The state recorded 352 more cases on Friday, its second highest daily toll during the pandemic.

Administration officials have echoed the president, pillorying Democratic critics and the media as alarmist.

White House press secretary Kayleigh McEnany complained that the media have set a double standard. She said little concern was raised about the spread of COVID-19 as demonstrators took to the streets to demand changes in policing.

Economic adviser Larry Kudlow said the spikes in some states were “small bumps,” and he argued that increased testing had accounted for the surge in positive cases. Vice President Mike Pence, who early in the crisis took a decidedly more cautious tone as Trump chafed against public health expert recommendations, dismissed concerns about a second wave of the virus as “overblown.”

Nadia Abuelezam, a Boston College epidemiologist, said she worried that rhetoric that turns mask-wearing into a politically fraught action could lead to more deaths and infections.

“When we’re talking about empowering people to protect themselves and to protect others, incorporating politics muddles the education piece at a time when some people might not fully understand why masks work in the first place,” Abuelezam said.

Trump sees a winning message in presenting voters with contrasting images of himself traveling the country to make his case for a second term while presumptive Democratic nominee Joe Biden sticks closer to home. Trump insists that the virus is “fading away” and that a vaccine, which he predicts will be available by year’s end, might not even be needed.

Eberhart, the GOP donor, said he wished Trump would be “a bit more cautious” and delay big stadium rallies a little longer.

“To use a football analogy, Trump is more of a coach that is trying to win the game than a GM or a coach with foresight that is looking to next season or his legacy,” said Eberhart, CEO of Canary, one of the nation’s largest privately owned oilfield services companies. “Trump is really concerned about the news cycle and the next news cycle, and he’s worried about his reelection. But I don’t think his legacy or what the history books are going to say enters his cortex.”

With his rally, Trump is also flouting Centers for Disease Control and Prevention guidelines that, for now, discourage large indoor gatherings.

Trump aides say the campaign will conduct temperature checks of rallygoers and supply hand sanitizer. Face coverings will be distributed, but people won’t be required to wear them. CDC guidelines call for the use of masks in areas where individuals cannot maintain social distance.