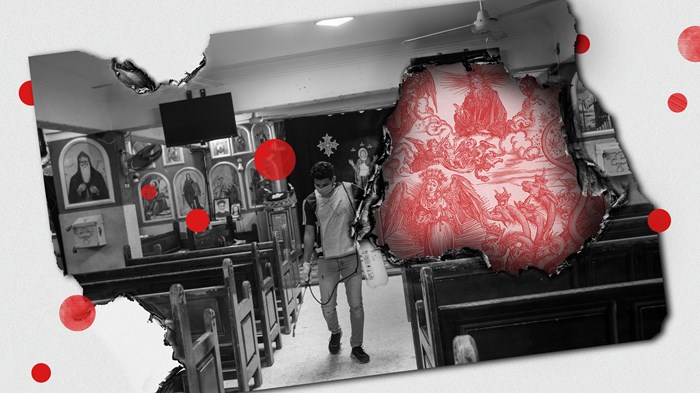 As chatter increased in the Arab world over the soaring coronavirus death tallies in China and Iran, the president of Jordan Evangelical Theological Seminary (JETS) in Amman began preaching on eschatology in lockdown.

“The coronavirus could qualify as one of the calamities that point to the end times, but could also just be a passing plague,” he said in a widely shared video series posted in March.

“We cannot be dogmatic, but at the very least [these] distresses have resemblance to much more severe events in the future time of tribulation.”

Diligently studying to incorporate aspects of all theological systems, Shehadeh aimed to keep the Cross central within a literal hermeneutic.

“The more we study prophecy,” he said, “the more we can see things in our world that others cannot, like a physician who knows immediately how to treat a wound.”

COVID-19 has left many bleeding.

Shehadeh previously wrote a four-volume commentary on biblical prophecy. It was written in Arabic, he said, to address the gap created by a lack of traditional Catholic and Orthodox focus on eschatology. A gap sometimes mirrored in the older Protestant denominations of the Middle East.

Shehadeh founded JETS in 1991. By contrast, the Near East School of Theology (NEST), the first Protestant seminary in the Middle East, was founded in Beirut in 1932 by pioneering Presbyterian and Congregationalist missionaries.

“Every time there have been wars and pestilences in history, some people have either proclaimed the end or busied themselves with the question of signs,” said George Sabra, president of NEST. “We should not waste time doing the same, but show God’s love and compassion toward the suffering.”

In fact, there is a distinct danger in a dispensational-type approach to eschatology, he said. It often leads to Christian Zionism, which, with its pro-Israel bias Sabra believes is “harmful” to the Christians of the region.

“We need to shield ourselves from theologies that often lead to a Christianity dominated by a victim mentality, in line with political and religious extremism,” he said, acknowledging that some dispensationalists also fall prey to such extremes.

“But allegorical interpretations deny God the right to express himself through the plain-sense words of Scripture.”

Shehadeh emphasizes his approach is not about any modern political entity but about God’s mercy to all nations. Many Americans, however, put Israel in the forefront.

According to a LifeWay Research survey released in March, 7 in 10 evangelical and black Protestant pastors see the modern state of Israel as a fulfillment of biblical prophecy in advance of the end times.

The “birth pangs of the Messiah” are a shared belief between evangelicals and Orthodox Jews, stated Mitch Glaser, president of Chosen People Ministries, a joint sponsor of the survey.

And a similar survey sponsored by the Joshua Fund suggests Jews—at least in America—are responding at even greater rates. Nearly 2 in 5 (38%) said the pandemic has increased their interest in the Bible’s teachings (including end-times prophecies), compared to 1 in 5 (22%) for non-Christians in general.

It is unwise to guess if these findings hold in Israel, said fund founder Joel Rosenberg, who also co-sponsored the LifeWay survey through the Alliance for Jerusalem.

But while the Hasidic community has been hit hard by the pandemic, Rosenberg believed the return to the Bible—including the New Testament—is driven by the less observant.

“Most Jewish people in Israel, the US, and around the world have either rebelled against or drifted from strict Orthodox Judaism,” he said.

“Whatever the reasons, the rejection of their own religion has left them spiritually empty and searching.”

To address this need, the Joshua Fund published a 12-page fact sheet in English, Hebrew, and Arabic. It summarizes God’s “sovereign purposes” for plagues as either divine judgment, warning of sin, or awakening from spiritual slumber.

The original Methodius was a fourth-century church father, a bishop in Olympus. But in northern Syria, an unknown author appropriated his name to write a Syriac apocalyptic text, following the Islamic conquests of Christian territory.

“Islam’s arrival was the punishment for sin,” said Wageeh Mikhail, a Christian-Muslim relations expert for ScholarLeaders, summarizing Pseudo-Methodius. “But even if Islam is dominating now, a later Roman emperor will arise and defeat the enemies of the faith.”