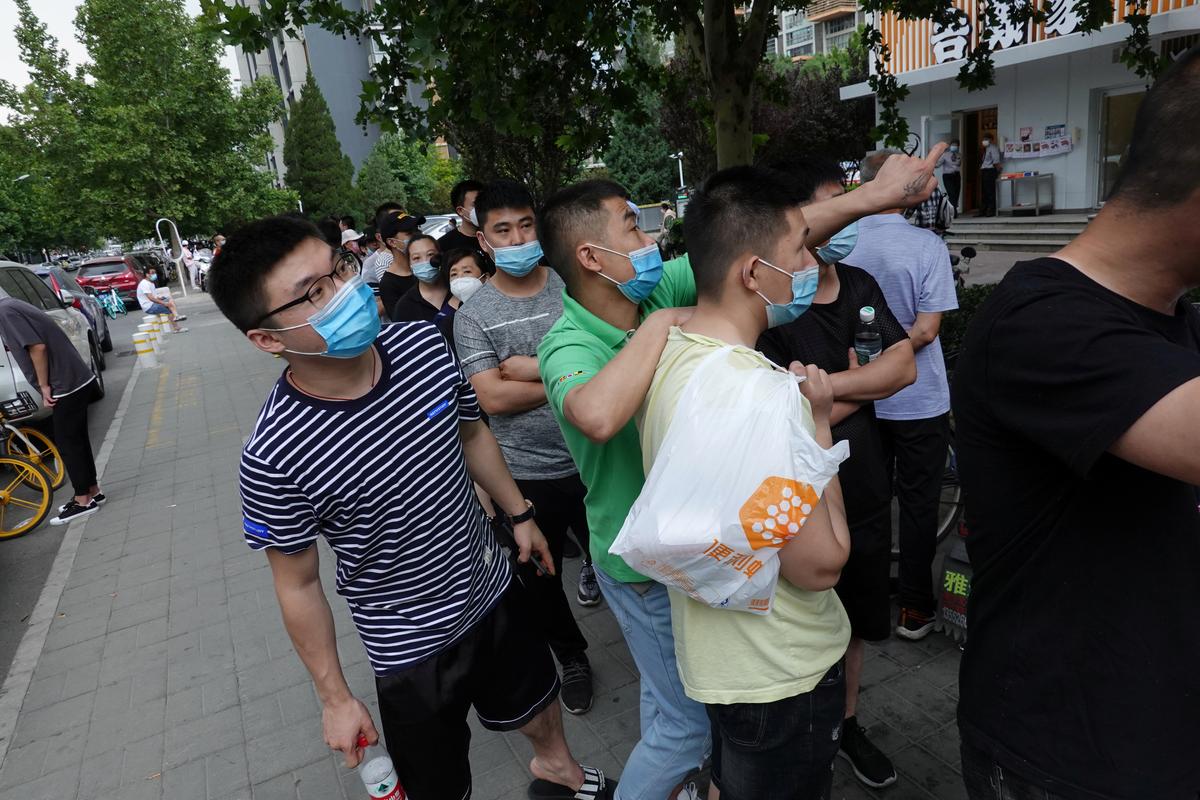 BEIJING (Reuters) – China’s capital has mandated coronavirus tests for hundreds of thousands of people as it widens measures against a new outbreak of the disease that has sent anxious residents flooding to clinics for voluntary tests, putting a strain on the system.

Crowds of masked people waiting for tests have become a common sight in recent days across Beijing, which has tested more than 350,000 people, with many more expected.

“It’s very difficult right now,” said musician Chen Weiwen, 31, whose plans to visit the southwestern city of Chengdu faced a delay because of the wait for a test.

“I don’t mind waiting, but after the test I need to leave in 7 days and there may not be a flight I can get then.”

The measures are part of the city’s “wartime” response to a surge of 158 infections since last week, the majority linked to its huge Xinfadi wholesale food centre.

Residents now require a negative result on a nucleic acid test to travel, officials say, as well as to visit some attractions or return to work in industries that involve food handling.

That is in addition to mandatory tests for those with direct links to the market and their close contacts, as well as people in surrounding neighbourhoods and frontline health workers.

That could be a large number, as officials say about 200,000 people from all over Beijing have visited Xinfadi since May 30.

“Those who need to leave Beijing can safely do so once tested negative in a nucleic acid test.”

Staff at a restaurant in the southern Fengtai district told Reuters that health workers had tested every employee.

LONG WAITING TIMES
At the same time, state media warned that supplies in the city of 21 million could be strained, and Reuters checks showed waiting times for voluntary appointments stretched to weeks or months in some places.

China, a top producer of nucleic acid tests, could turn out up to 5 million a day, authorities said last month. Beijing has expanded daily testing capacity to 90,000, but the new programme puts a strain on resources.

That in turn heightened infection risks and pressure on the supply of materials and testing capacity, it added.

A Reuters check showed many testing facilities inundated by those seeking voluntary tests, with bookings filled as soon they opened on the city’s official app.

Just one of 11 test sites telephoned by Reuters answered. The First Medical Center of the People’s Liberation Army Hospital said its next available slot was a month away.

The Beijing effort is China’s latest mass testing exercise, though it is more focused than a similar programme in Wuhan, the central city where the virus first surfaced last year, that had tested more than 6 million people in less than 10 days.

In Beijing, people marshalled for mandatory tests in converted parks and sports fields said test times were designated for them in door-to-door checks forming part of a contact tracing campaign.

Those without tickets distributed by organisers would be turned away, one organiser told Reuters.