The leading pastor of a popular Atlanta megachurch has apologized for his ‘horrible choice of words’ after he said white people don’t recognize the ‘blessing’ of slavery and suggested using the phrase ‘white blessing’ instead of ‘white privilege.’

The three had hosted an ‘open and honest conversation’ around race and Christianity, amid the recent reckoning over racial injustice and police brutality in America.

During the discussion, Giglio said the church was fighting ‘this historical context’ in which followers ‘love the blessing of the cross but we don’t love to sit in it’.

He then went on to make an analogy using the country’s history of slavery, saying white Americans fail to recognize the ‘blessing’ that came from the oppression of black people that allowed them to live a privileged life in society.

‘We understand the curse that was slavery, white people do, and we say “that was bad,” but we miss the blessing of slavery that it actually built up the framework for the world that white people live in and lived in,’ he said.

‘A lot of people call this white privilege and when you say those two words it’s just like a fuse goes off for a lot of white people because they can’t they don’t want somebody telling them to check their privilege.’

Giglio, speaking directly to Lecrae, then suggested using the phrase ‘white blessing’ instead of ‘white privilege’.

‘I think maybe a great thing for me, is to call it “white blessing”. I’m living in the blessing of the curse that happened generationally, that allowed me to grow up in Atlanta,’ he added.

A video of the discussion was widely shared on Twitter and was heavily criticized by viewers including Lecrae himself.

Another wrote: ‘White privilege is wanting to rebrand something as white blessing because white fragility makes white people not want to hear about white privilege. Yeah, the concept is supposed to make you uncomfortable because the reality is uncomfortable.’

Following the backlash, Lecrae addressed the controversy in a video shared on Twitter condemning Giglio’s choice of words.

The rapper, 40, admitted feeling uncomfortable during the conversation saying ‘in that moment I was processing, like “man, what do I do.”‘ 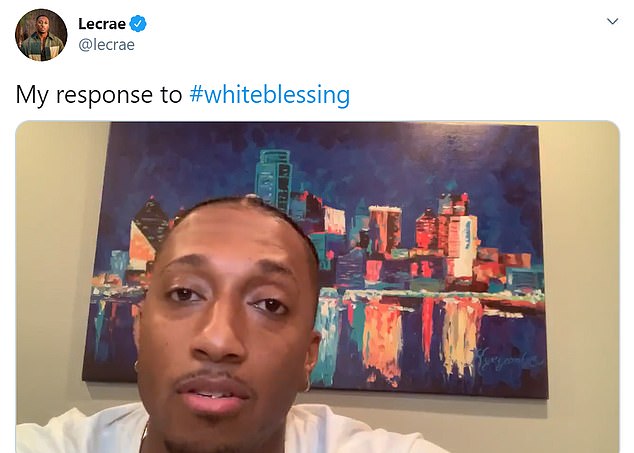 ‘I talked to him again last night and let him know my views and my perspectives and obviously I wasn’t okay with it. And we can’t just be virtue signalling and doing this because it’s the in thing to do to talk about race on platforms,’ he added.

Giglio later responded to the criticism on Twitter and clarified he was trying to ‘help us see society is built on the dehumanization of others.’

He further apologized in a subsequent video uploaded on social media, acknowledging his poor choice of words.

‘I just wanted to come directly to you today for the use and sincerely apologize, for the use of the phrase on Sunday “white blessing”,’ he said.

‘And in trying to get that sentiment across on Sunday, I used the phrase “white blessing”, for which I’m deeply sorry. Horrible choice of words, it does not reflect my heart at all. I don’t believe there’s any blessing in slavery, to the contrary.

Giglio is the founder of the ‘Passion Movement’, established in 1997, which aims to unite college students for a ‘spiritual awakening in this generation’.