Mother of black man who was shot dead by Indianapolis police sues officers including one who said ‘looks like it’s going to be a closed casket, homie’ 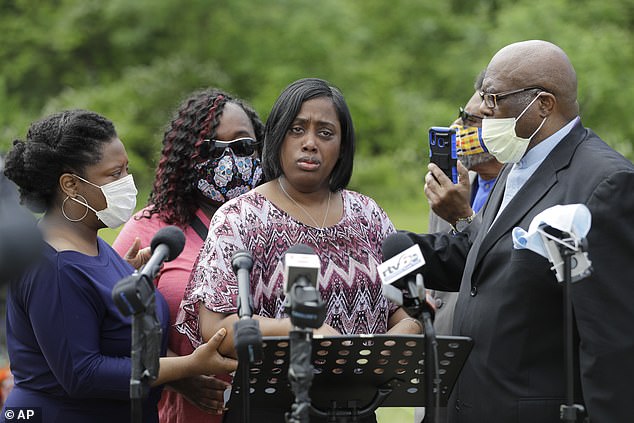 The family of a black man who was shot dead by cops during a foot chase in Indianapolis have filed a federal lawsuit against the city, its police department and four officers involved.

The suit, obtained by DailyMail.com, alleges the officers involved in the slaying of Dreasjon ‘Sean’ Reed, 21, weren’t properly trained on the use of deadly force.

It also charges that Reed’s constitutional rights to due process were violated during the May 6 chase and seeks unspecified damages.

Named among the defendants is Dejoure Mercer, the officer who shot and killed Reed.

Also named is Tony Scott, a cop who was caught on live-streamed video footage taken by the victim saying ‘looks like it’s going to be a closed casket, homie’. Both cops are black.

The deceased man’s mother Demetree Wynn announced the suit during an emotional press conference on what would have been Reed’s 22nd birthday Tuesday.

‘We talked about how this day was supposed to go. But I can’t stand here with him because he was taken away from me,’ said Wynn at the briefing as white doves were released in her son’s memory, reports The Indianapolis Star.

The lawsuit comes at a time of nationwide protests against police brutality and discrimination following the death of George Floyd in Minneapolis.