J.D. Greear and the Summit Church’s policies come under question due to Bryan Loritts’ alleged covering up of sex abuse

Since the beginning of 2019, Southern Baptist Convention President J.D. Greear has been among the most high-profile advocates for preventing sex abuse and protecting victims of abuse in the nation’s largest Protestant denomination.

Greear, pastor of The Summit Church, a megachurch in Durham, North Carolina, called for Southern Baptist leaders to investigate and oust churches that cover up abuse.

He set up an advisory group of experts to aid the SBC in dealing with the issue of abuse, helping create a “Caring Well” initiative to prevent abuse and minister to survivors.

“The failures of the way of man brought us to the place we are as a denomination on this issue of abuse,” said Greear at the meeting. “It is only the movement of God, we know, that can rescue us from it. It’s not just policy. It’s not just statements and changes. It’s the spirit of God working in us.”

Now advocates for abuse survivors are criticizing Greear after his church decided to hire a teaching pastor who has been accused of mishandling an abuse claim in the past and for a Summit Church policy that would allow registered sex abusers to attend worship services.

Greear, who is expected to continue to serve as SBC president for another year due to the coronavirus pandemic, said he stands by his church’s decision to have Bryan Loritts begin serving as a teaching pastor on Monday (June 1).

Ten years ago, accusations arose that Rick Trotter, Loritts’ brother-in-law, was involved in sexual misconduct at Fellowship Memphis, a church Loritts helped found in 2003, and where Trotter was worship director.

The issue was that “a single incident of Trotter recording people in a bathroom was reported” in 2010 at Fellowship Memphis, according to a joint statement issued in 2016 by the church and Downtown Church, another Memphis congregation.

Trotter was terminated from Fellowship Memphis in 2010.

The following year, he became a subcontractor at Downtown Church. Leaders of both churches “openly discussed Trotter’s prior sexual misconduct and the counseling he attended for sexual addiction,” the joint statement said.

After Trotter became a full-time staffer with Downtown Church, he was terminated when another instance of sexual misconduct was reported.

In 2018 he received a 60-day sentence after confessing to using a phone camera to videotape under the skirts of female congregants and pleading guilty to four counts of video voyeurism, according to The Commercial Appeal.

“I was devastated to learn a few years later that the perpetrator had repeated these crimes at another church, Downtown Church,” Loritts said in a statement distributed by The Summit Church.

The church, in turn, shared Loritts’ comments with those inquiring of Greear about the hiring. Loritts noted that the 2010 incident involved both a perpetrator and one victim (of several) who were family members.

He said in the statement that “church elders removed me from dealing with the case early in the process” to avoid concerns about nepotism.

Greear’s letter said Loritts said he spoke to two victims of the 2010 incident before being removed from the case.

“Prior to that removal, I never discouraged any victims from choosing to prosecute the individual,” Loritts said in a statement. “In fact, I encouraged two victims I spoke to directly (both my family member and one other) to prosecute.”

Loritts, who went on to become pastor of Abundant Life Christian Fellowship in Mountain View, California, was not available for comment. Leaders of the Memphis churches could not be reached immediately for comment.

The SBC president’s account notes that a 2010 Fellowship Memphis staffer confirmed the church contacted authorities based on Loritts’ instructions.

Summit’s legal counsel, according to the account, said the police department said no documentation of the matter currently exists, based in part on how long ago it occurred.

“We would not — and I believe you know this — bring any pastor here whom we were not convinced was fully supportive of the direction we believe churches need to go on the prevention of and reporting of abuse and care for survivors,” Greear concluded in the statement.

Loritts said in his statement that he was ready to start his new role.

“I look forward to learning more and seeing what J.D. has done at Summit in his initiative to provide better care for and protection from sexual abuse in our churches,” Loritts said in the statement. “Each survivor is a precious soul who matters deeply to God. I believe we must better extend grace as a people, but we also recognize that those who use their sacred position of shepherd to prey on the sheep should not be given opportunities to do so again.”

Cheryl Summers, who has organized annual “For Such a Time As This” rallies seeking more SBC action to address abuse, said she and other advocates were “disheartened and alarmed” when they learned of Loritts’ new role.

She described him as “someone who is alleged to have covered up sex crimes committed by a family member while both men were employed by a Memphis area church.”

Summit Church says there was no cover-up. 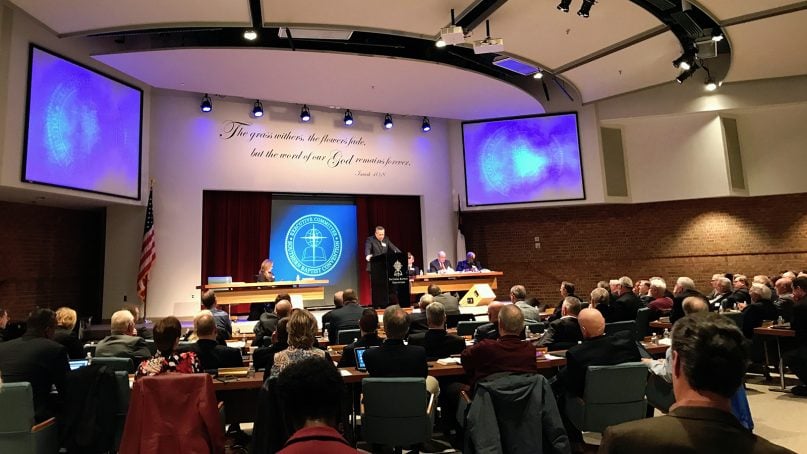 After an inquiry, Greear said, “it was clear to us that, for his part, Bryan did not attempt to protect the abuser or discourage victims from pursuing justice.”

Summers and the Rev. Ashley Easter, a spokeswoman for the group of abuse survivor advocates, also criticized a policy within the SBC’s Caring Well resources. That document, they say, is based on a document from Greear’s church.

The document outlines how registered sex offenders can be incorporated into worship services if they are monitored by “shepherding individuals” and kept away from children and any person or family member of a person they have harmed.

“Abusers should NOT be allowed on church property during services and certainly not in serving/leadership positions,” said Easter.

“Yes, our policy is still to require perpetual supervision and full awareness by the campus security team, elders, and children/student ministry leaders for an individual under RSO status to attend a weekend service,” he said. “All involvement or attendance in children or student ministry is prohibited, even if the RSO’s children are involved. Any involvement in an adult discipleship setting (i.e., a small group) requires the full awareness of their offense and consent of the adults in that setting.”

Abuse advocates held a virtual rally on Tuesday. That same day, denominational leaders held an online “SBC Advance” to update members of the denomination. The denomination’s annual meeting was canceled due to the coronavirus pandemic.

Rally organizers say they are continuing their call for an official Southern Baptist database of clergy who are convicted or credibly accused sex offenders, as well as more training, a request they say has been “partially fulfilled by the Caring Well curriculum.”

According to a report of the SBC’s Ethics and Religious Liberty Commission, “hundreds of churches and thousands of Southern Baptists” have taken the “Caring Well Challenge” or used abuse prevention resources.