When Pope Francis was elected pope, the Vatican was in trouble.

The Roman Catholic Church’s mishandling of sexual abuse and a series of financial scandals had challenged the credibility of the institution and emptied its pews.

For Francis, the root of the church’s problems was clericalism: the belief that religious people belong to a superior caste, insulated by favoritisms, which has helped promote an air of moral superiority among clergy.

“Clericalism is our ugliest pervasion,” the pope told seminarians last year. “The Lord wants you to be shepherds; shepherds of the people, not clerics of the state.”

The mentality behind clericalism, according to Francis, has helped spread corruption within the Catholic Church. Victims of sexual abuse were not taken seriously, and predator priests were moved instead of removed in order to save face. The belief that only those who are ordained have authority has helped marginalize laypeople in the Catholic Church, especially women.

Like activists in the United States and around the world trying to break the stronghold of systemic racism, the pope was faced with a malady that has its roots in centuries-old traditions and practices and structural sin.

To change it — or at least to start making a change — the pope needed a combination of big gestures and long-term strategy, to ensure that the changes he makes today resonate in the future.

According to Archbishop Vincenzo Paglia, the head of the Vatican think tank for matters promoting life, Pope Francis has tried to implement a “revolution of fraternity.”

“This ‘fraternity’ starts with paying attention to the excluded, with the care for existential and geographical peripheries,” the archbishop told Religion News Service on Friday (June 12).

The first step involved changing the “style” of the papacy, Paglia said. 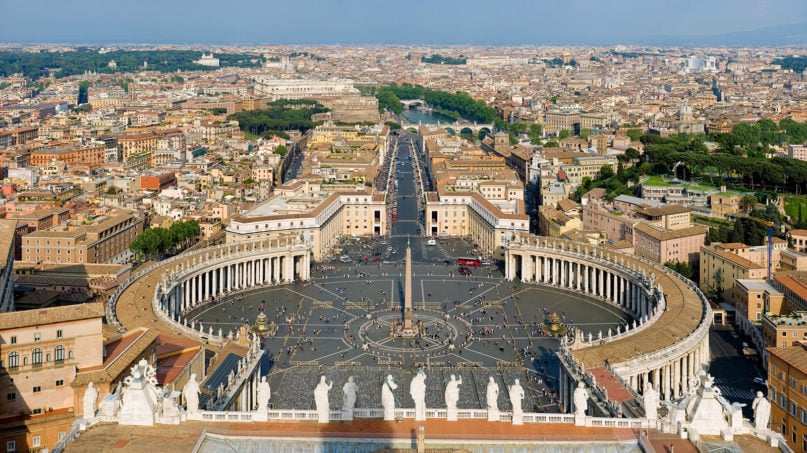 A view of St. Peter’s Square, Vatican City, and Rome from the top of Michelangelo’s dome in St. Peter’s Basilica. Photo by David Iliff/Creative Commons/CC BY-SA 3.0

Francis’ decision to live in Domus Sanctae Marthae instead of the traditional papal palaces sent a message of simplicity and humility. The Argentine pope opted for simple clothing, avoiding the colorful flourishes of his predecessors and helping to promote a public image that portrays the church and its clergy as closer to the people.

The pope also tries to use simplified language and communication to make the Catholic message more appealing, according to the archbishop.

Pope Francis “expresses the same gospel in a new language, understandable to the men and women of the 21st century,” said Paglia.

While using a new language and public image is an important first step for Francis, the biggest challenge lay in changing the culture within the Vatican and its institutions.

That starts with the bureaucracy that makes up the Roman Curia.

In this case, the pope has chosen a “long process” aimed at “changing hearts and minds,” Paglia said.